Clean Up and Salvation Army Service Continues in San Antonio 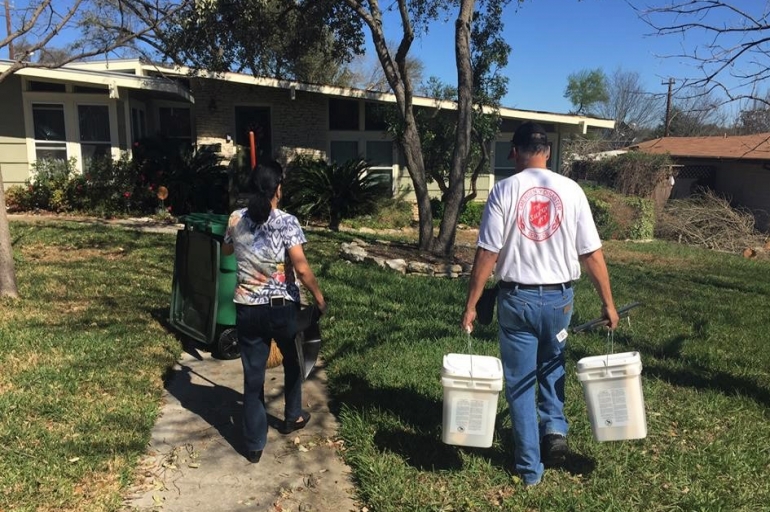 One of the major challenges to service has been the extensive amount of debris on the streets caused by fallen trees and damage to homes and businesses. Much of the service provided has been facilitated by pickup truck with staff delivering clean up kits and refreshment on foot from door to door. Meals have been served at fixed sites from two mobile kitchens.

“It has been a privilege to help those who are working so hard to clean up their homes and streets,” said Brad Mayhar, Public Relations/Media Manager for The Salvation Army San Antonio Command. “The community has really pulled together and The Salvation Army is here to help in whatever way we can. Homeowners have really appreciated the clean up kits.”

Since Monday morning The Salvation Army has distributed 795 snacks, 653 meals, 1,568 drinks, and 177 clean up kits. Additionally, staff and volunteers have prayed with 111 people during the response efforts.

Shipley Do-Nuts Bitters & Blanco provided donuts and Taco Cabana delivered tacos that were distributed to residents and first responders by The Salvation Army. “We are so grateful to our community partners for their continued support of The Salvation Army and our relief efforts,” said Mayhar.

Mobile food service ended on Wednesday evening and The Salvation Army in San Antonio will continue to assess the situation and provide support and assistance where needed.