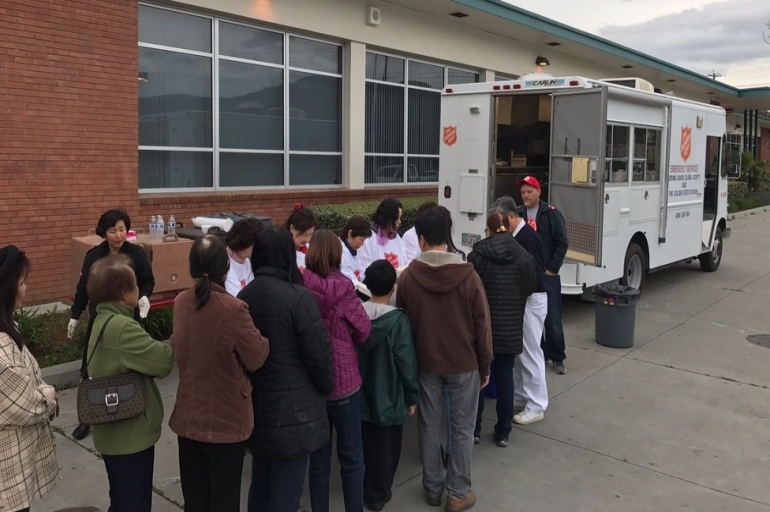 Last week, the Army, in partnership with the City of San Jose and the American Red Cross began responding to the needs of nearly 300 evacuees staying at two emergency shelters.  Staff and volunteers worked tirelessly, preparing dinners, lunches, snacks and hydration.  On Saturday, Feb. 25, the Santa Clara Corps served 199 meals at lunch time to individuals and families at the Local Assistance Center. To date, The Salvation Army has provided 1,217 meals, 1,800 clothing items, 260 shoes, 250 socks, and 50 blankets.

“We are blessed to be able to help so many devastated by the floods,” said Major David Yardley who leads the Army’s Silicon Valley Command.  At the height of the flood concerns, an estimated 14,000 residents were under mandatory evacuation orders, many of whom were rescued by fire officials in boats when neighborhoods were submerged under water after swollen Coyote Creek overflowed.

Going forward, The Salvation Army Emergency Disaster Services management is assessing how best to assist the most vulnerable in the community. “Need is great, especially among those who lost everything,” said John McKnight, Director of Emergency and Disaster Services.

The Salvation Army is responding to the needs of those affected by the overwhelming flooding in many parts of California including San Jose, Salinas, Bishop, Turlock, Modesto, and Hollister. The Salvation Army staff, officers, and volunteers will continue to provide much needed care to a growing number of people.

For the latest emergency disaster services news for The Salvation Army across the United States, please visit www.disaster.salvationarmyusa.org and follow the EDS team on Twitter @SalArmyEDS.