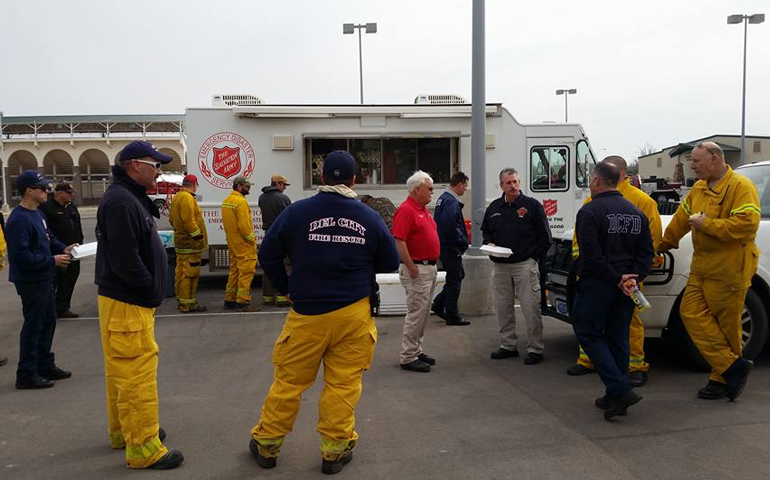 OKLAHOMA CITY (March 8, 2017) – The Arkansas-Oklahoma Division of The Salvation Army is responding to a very large wildfire affecting multiple counties in Northwestern Oklahoma.   Record temperatures, drought and strong winds are causing extreme fire danger to much of Oklahoma.   The Oklahoma Department of Emergency Management requested assistance to support the fire departments, Oklahoma Forestry Service and other first responders fighting the ongoing wildfires.

In Harper and Woodward counties, helicopters and air tankers as well as seven task forces with specialty fire equipment and trucks arrived on Tuesday and Wednesday to help.   Governor Mary Fallin has declared a State of Emergency for 22 Oklahoma counties due to ongoing wildfires and critical fire weather conditions that began Monday.

The Director of Emergency Disaster Services for the Arkansas-Oklahoma Division, Steven Hartsook, placed units on standby Monday evening as wildfires broke out across Oklahoma.  On Tuesday evening, two mobile feeding units (canteens) were deployed to help support firefighting efforts.  He states “we were happy to answer the call to serve and will be working closely with the on-scene Incident Management Team and our partners to meet the nourishment needs of the brave men and women working so hard to extinguish these wildfires.”

The Enid canteen, led by Major Ernest Hull, Commanding Officer, arrived on scene late Tuesday evening with a crew of four plus himself.   The crew includes the Advisory Board Chair, Demetrius Office, who has trained and committed to being available to help during times of disaster.

The Altus canteen, led by Major Ben Walters, Commanding Officer, also arrived on scene late Tuesday to assist with the feeding, hydration and emotional and spiritual care of the responders.

The Salvation Army is working closely with Emergency Management and the Oklahoma Voluntary Organizations Active in Disaster to ensure the response is closely coordinated.  Our support will continue until assistance is no longer needed.  With lower winds predicted on Thursday, firefighters are hoping the fire will soon be contained.

Additional updates will be provided as necessary.