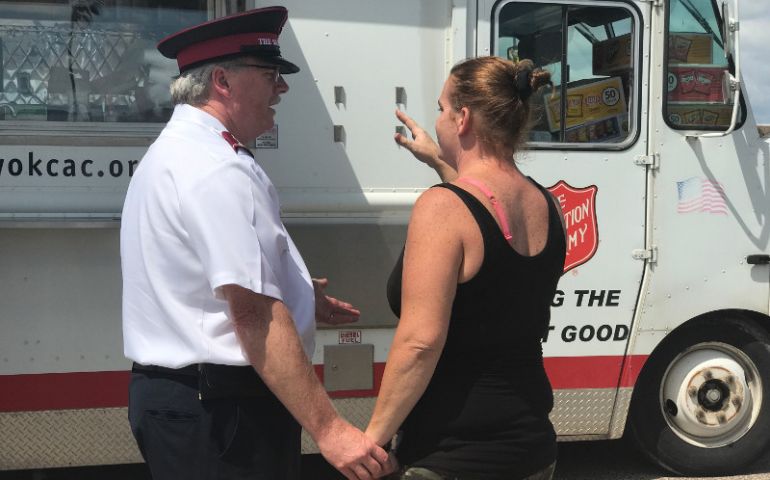 Dallas, Texas (August 30, 2017) – As flood conditions slowly improve in some areas of the state and clean-up crews work to make communities accessible, The Salvation Army continues to increase mobile feeding efforts in Texas. With 71 mobile kitchens from Texas and beyond now available for deployment The Salvation Army relief teams are able to reach more people with emergency services each day.

“Every team being deployed in Texas can provide food, hydration, and emotional and spiritual care to those impacted by this weather event,” said Lt. Col. Ronnie Raymer, Divisional Commander for The Salvation Army in Texas. “We’re uniquely positioned to provide support and relief to Houston and communities along the Gulf Coast.”

The Incident Command Team deployed from Florida to Texas arrived in Houston mid-morning Tuesday and quickly established an Incident Command Center at the Northwest Corps. In addition to the eight-person leadership team, two shower trailers also arrived from Florida, each containing eight individual shower stalls. These units are stationed at the Matzke Elementary school that is currently housing 500 evacuees. Two mobile bunk houses are also in place and ready to be deployed.

Many of these communities have been without power since Hurricane Harvey made landfall on Saturday and several cities remain without running water.

The Divisional Commanders of The Salvation Army Texas Division, Lt. Colonels Ronnie & Sharon Raymer, visited operations in Rockport today, the first day of mobile kitchen service in this community. A Rockport resident approached The Salvation Army mobile kitchen crew while they were setting up to provide lunch and with tears filling his eyes said, “I knew you would come.”

After seeing first-hand the devastation caused by the storm, Lt. Colonel Ronnie Raymer said, “The need is great here in Rockport and indeed all along the Texas coastline. We hope to send multiple feeding units in the coming days to support the residents of this hurting community who have already been through so much and lost a great deal. Our love and prayers go out to each of them."