The Salvation Army of Georgia Canteens on the Way to Texas 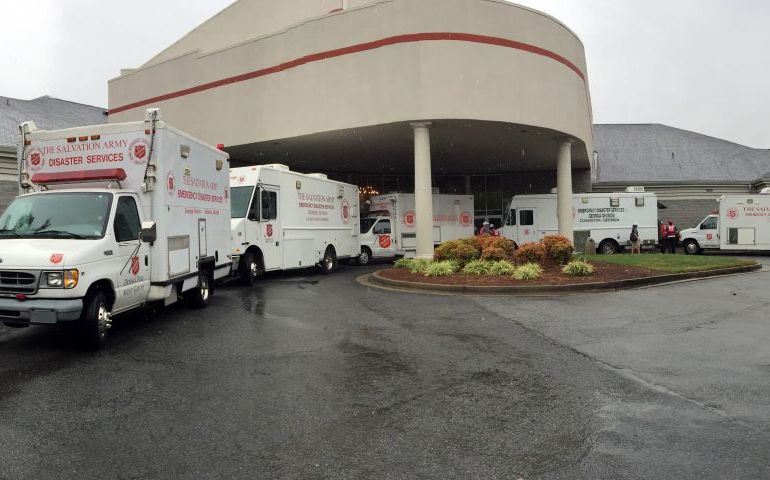 Eleven mobile feeding units (canteens) from The Salvation Army of Georgia are on the way to Texas destined to help those affected by Hurricane Harvey. The Georgia canteens join 42 other canteens from around the southeast that have been on the ground in Texas since before Hurricane Harvey made landfall early last week.

The canteens will deploy to Houston with 27 Salvation Army staff, officers, and volunteers to help with relief efforts. They join 60 other volunteer teams and mobile feeding units already in Texas. In the upcoming weeks, The Salvation Army will continue to send teams as needed, with an additional 500 emergency disaster vehicles on standby throughout the United States and Canada.

“So far, nearly sixty inches of rain has fallen in the Gulf Coast region. The Salvation Army served victims after Hurricane Katrina and Hurricane Matthew, but we’ve never seen anything like this. We will be on the ground in Texas to help those impacted by this disaster as long as we’re needed,” says Salvation Army Major Mark Woodcock.

The Salvation Army has a fleet of mobile feeding units designed for rapid and free-standing response in times of emergency. The canteens can be stocked with three full days of food and drinks, and can serve 1,500 meals per day. After deployment, the mobile canteens can be restocked and moved throughout affected areas.

On Tuesday, the first of several of Georgia’s Salvation Army Incident Management Teams (IMT) deployed to one of the hardest hit areas around the city of Victoria, Texas. The IMT will monitor the continually changing situation in the area and communicate with state and local officials to coordinate efforts and respond effectively. In addition, a representative from The Salvation Army will work with the State Operational Command (SOC), located in Austin, Texas, to help coordinate relief efforts among federal, state and local organizations.

Those who want to help people directly affected by Hurricane Harvey are asked to donate in the following ways: