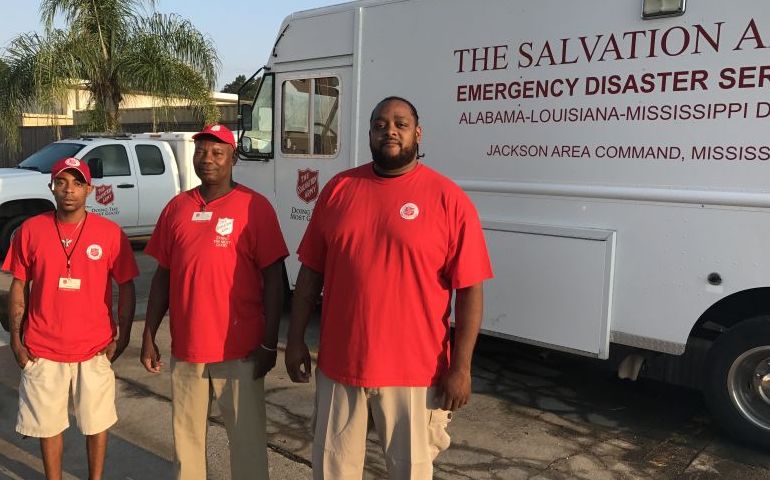 Lake Charles, LA – What do you get when you combine the letters A-L-M and K-T? For those in Southeast Texas who have seen flood waters rise due to Harvey making landfall a second time, these letters spell H-O-P-E.

Two divisions of The salvation Army, Kentucky-Tennessee and Alabama, Louisiana, and Mississippi, are combining to provide food, drinks and emotional and spiritual care to hundreds of residents cut off since Wednesday. If they can get there themselves. Interstate 10 from Louisiana to Texas has been close to traffic following the storm.

The Kentucky-Tennessee Division’s, Major Roy Williams says they know their target cities of Beaumont, Texas is without water, and The Salvation Army Corps in Port Authur, Texas has been damaged by water.

“At this point, we are sending one truck to find out what the situation is in Port Authur, Orange and Beaumont,” said Major Williams. “We want to see for ourselves before we deploy the canteens at our disposal.”

For canteen crews, they are ready to get in the effected area and help the residents in need. The Jackson, Mississippi Corps has a canteen and a catering truck in Lake Charles with three crew members. Sherman Sanders, a ten-year employee of the Jackson Corps, says he's prepared to help now, but understands why they are delayed.

“We have to make sure of our safety," said Sanders. “We want to help people, but make sure we have a safe path to them.”

Crew member, Chris White says he and his team want to bring a blessing to those in need after Harvey.

“I haven’t been through what they are going through,” said White. “To help others is a blessing, and just to put a smile on their faces.”

“It’s in our hearts. This could be us one day, and we would want other to help us,” said Sanders.

This team has six feeding trucks to serve those in need.