When I Saw You Pull In, I Knew There was Hope 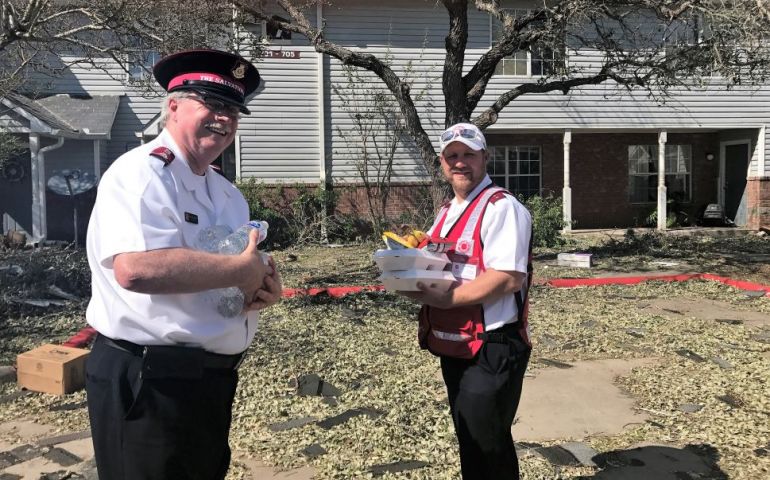 Corpus Christi, TX (August 31, 2017) Lt. Colonels Ronnie and Sharon Raymer, leaders of The Salvation Army of Texas, spent Tuesday afternoon in some of the hardest hit areas in the Coastal Bend Area, including Rockport, Texas. Captain Patrick Gesner, the commander of the Coastal Bend Salvation Army, took the Raymers around for a look at the impacted areas served by his command.

Shortly after arriving at the fixed canteen site in Rockport, Lt. Colonels Raymer and Captain Gesner began serving food and handing out water.  While serving, a very kind lady approached Lt. Colonel Sharon Raymer concerned as she had discovered people in a condominium complex who couldn’t get out to get food or water and were living in a place that may be unsafe.  She didn’t want or need anything but a cold bottle of water; she just wanted to get help for her neighbor.

The Raymers and Captain Gesner loaded up several meals, snacks, and cases of water in the back of their vehicle and followed the woman’s directions to the complex.  They easily found the people staying there – the walls of many parts of the building had been blown down by the storm.  Hot meals, cold water, and the love of Jesus was shared with all, including a woman staying with her daughter and two granddaughters, and a young mother of four.

Another stop brought Captain Gesner to Teresa who was living in a mobile home complex.  “When I saw you pull in, I knew there was hope,” Teresa said. Teresa had been served by The Salvation Army after losing her husband of thirty years.   “Thank you for the meal – especially the banana and potato chips,” she said. “The folks at The Salvation Army are my “angel drops” - they drop in like Angels to provide hope!”    Teresa shared one thought with Captain Gesner as he left. Quoting Emily Dickinson, she said, “Hope is the thing of feathers that perches in the soul and sings the tune without the words and never stops at all.”  There is always hope. After visiting Teresa, Captain Patrick Gesner said, “Maybe the hope someone is looking for is you.  Always be aware of divine opportunities . . . always.”

The Salvation Army will continue to provide hope to others in communities in Texas. You can help by making a financial donation.

Checks can be mailed to: