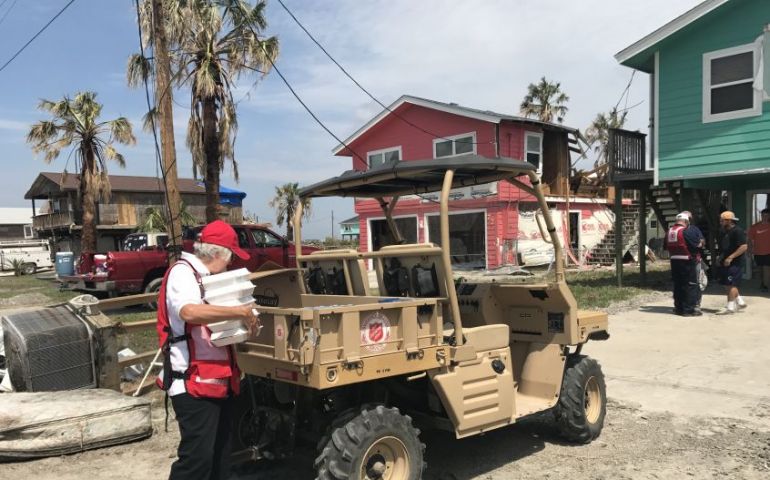 Corpus Christi, Texas (September 4, 2017) – The Salvation Army of Arkansas and Oklahoma are serving on the frontlines of the devastation from Hurricane Harvey.  Many of the feeding units and personnel currently deployed are serving at Ground Zero where residents are returning where many or most of the buildings and homes were destroyed.  In many areas, power is still not restored. This is the largest response that The Salvation Army has served Hurricane Katrina in 2005.

On Sunday, August 28, eight mobile feeding units arrived in Corpus Christi to serve Texas’ coastal bend area with two more units arriving on Monday, August 29.  The feeding trucks, manned by a cadre of 18 Salvation Army officers, employees, and volunteers, immediately began serving residents and first responders affected by the hurricane. Along with the feeding trucks, a team of 12 was deployed as an Incident Command Team to run the operation. All personnel are deployed for fourteen days.   With additional requests for specialized positions from the Texas Division of The Salvation Army fulfilled, there is a total of 33 personnel currently on the ground from the AOK division.

Feeding Units from the Arkansas-Oklahoma Division include:

Currently there are 14 people, a group made up of Salvation Army officers, volunteers and employees, on standby ready help with relief efforts. The additional personnel may be deployed as soon as Friday, September 8.

Financial donations are the best way to support relief efforts as the needs of those being served evolve daily.  It’s easy to support The Salvation Army’s disaster relief program: