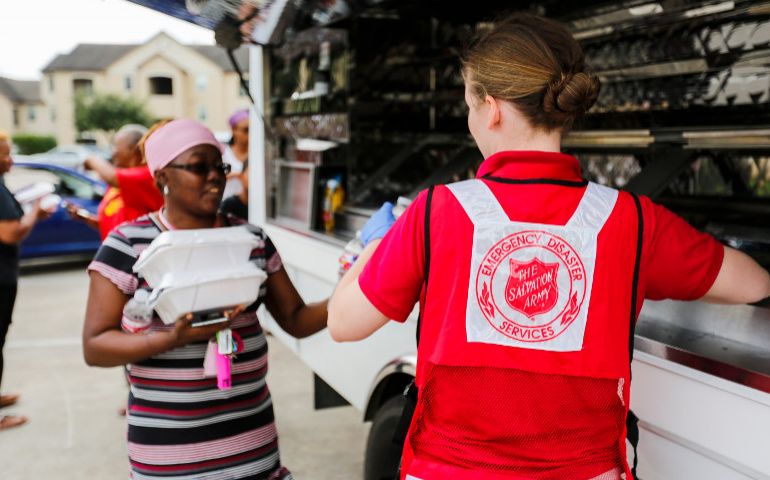 Dallas, Texas (September 4, 2017) – Salvation Army relief efforts have intensified over the holiday weekend as new areas of Southeast Texas have become accessible. Mobile feeding units and logistical operations have moved into the Golden Triangle area, working in Beaumont, Orange and Port Arthur, as well as communities that have so far been inaccessible in Houston.

Food delivery is taking place in seven counties along the coastline and Incident Command Teams are in place to oversee operations and service delivery in 13 counties. The Salvation Army is providing emergency shelter to evacuees in Abilene, Angleton, Corsicana, Freeport, Galveston, Houston Harbor Light/Red Shield, Waco, and Wilkerson. In order to support these area-wide efforts warehouses have been secured in Corpus Christi, Victoria and Houston.

Despite very challenging circumstances, particularly in the Houston and Golden Triangle areas, The Salvation Army churches held worship services on Sunday. In Port Arthur, after The Salvation Army’s chapel sustained significant water damage, a group of faithful church members led by Captain’s Frankco and Martha Higdon held an open-air meeting on the basketball court. “We may have lost everything, but we didn’t lose life or hope,” said Captain Frankco Higdon. “Our hope, our life, is founded on our risen Savior.”

Three feeding units served lunch and dinner at fixed sites in Beaumont while three others drove through the community offering assistance. Plans are in place to establish The Salvation Army location as a “comfort station” for the region providing a range of services including meals, clothing vouchers, and a shower unit.

In Houston, Best Buy has agreed to donate tablets that Salvation Army Emotional Spiritual Care teams will utilize to assist clients in signing up for FEMA assistance. Additionally, the IC Team plans to release a Google Survey to clients to better understand and assess their specific needs. 33 teams are providing meals, snacks and drinks from mobile feeding units in addition to emergency supplies throughout Houston and the surrounding counties.

The Salvation Army in Dallas/Fort Worth is serving three meals a day to evacuees in its official role as a member of the Mass Care Task Force, a strategic partnership between The Salvation Army, American Red Cross, North Texas Food Bank, and VolunteerNow. The collaboration began in 2006 following a mass evacuation to North Texas the previous year as a result of Hurricane Katrina.

The partnership allows each agency to focus on a strength area, thus reducing duplication of services and ensuring a more efficient response to help those in crisis. The four groups meet together monthly to be ready for a mass care activation like the current response for Hurricane Harvey.

On Sunday, the DFW Metroplex Command served 7,985 meals at the Hurricane Harvey mega-shelter at the Kay Bailey Hutchison Convention Center in Dallas and at several smaller shelters at city recreation centers, including one in Fort Worth. The number of meals will continue to increase as more evacuees arrive for compassionate and hospitable care in North Texas. Over the next several days, about 1,000 individuals are expected to come to the Dallas mega-shelter from one or more shelters in Alexandria, Louisiana.

74 mobile feeding units and teams from throughout Texas and beyond are providing tireless and committed service to those in needs. As of September 3, The Salvation Army has served 200,657 meals, 132,709 snacks, and 172,200 drinks statewide in response to Hurricane Harvey. Emotional Spiritual Care Officers have spoken with 7,892 individuals.