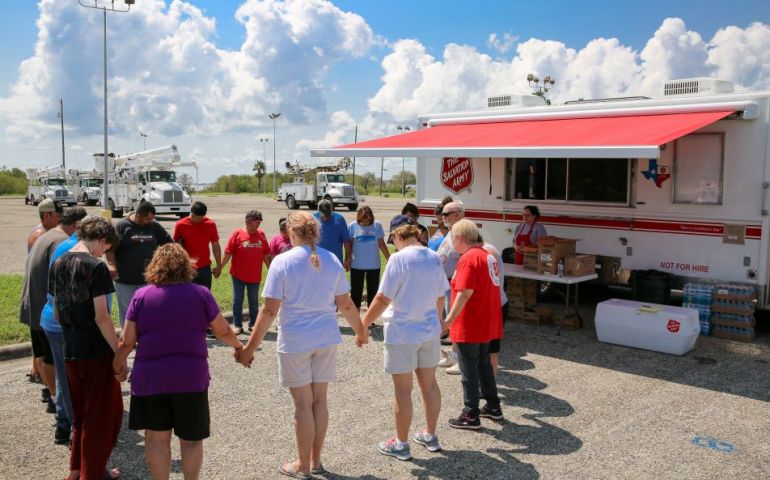 In the greater Victoria area, The Salvation Army is currently providing feeding, hydration and emotional and spiritual care at various sites in Victoria, Colhoun, Refugio, and Goliad counties.

The Salvation Army has a standing fleet of canteens designed for rapid and free-standing response in times of emergency. “Ten Salvation Army canteens from Texas, Kansas, and Oklahoma are specifically deployed to serve Victoria and surrounding areas,” said Captain Chris Powell, The Salvation Army Incident Management Team Director serving the Victoria area. “The canteens are stocked twice a day with food and drinks ready to serve affected areas. They have the ability to respond quickly to changing conditions to serve those in need.”

To date The Salvation Army has served approximately 4,000 meals and snacks, and 8,000 drinks a day in the greater Victoria area. Response to The Salvation Army’s presence has been extremely positive and appreciative. “My house is destroyed and I would not have eaten today if you had not been here,” said a woman from Port Lavaca, “Thank you!”

“The Salvation Army has been on the ground helping residents get back on their feet so they can start to rebuild,” said Lieutenant Jeremy Mockabee, Operations Chief for The Salvation Army’s Victoria Incident Management Team. “The Salvation Army is here standing strong for the local community, ready to respond aggressively and serve compassionately as long as we are needed.”