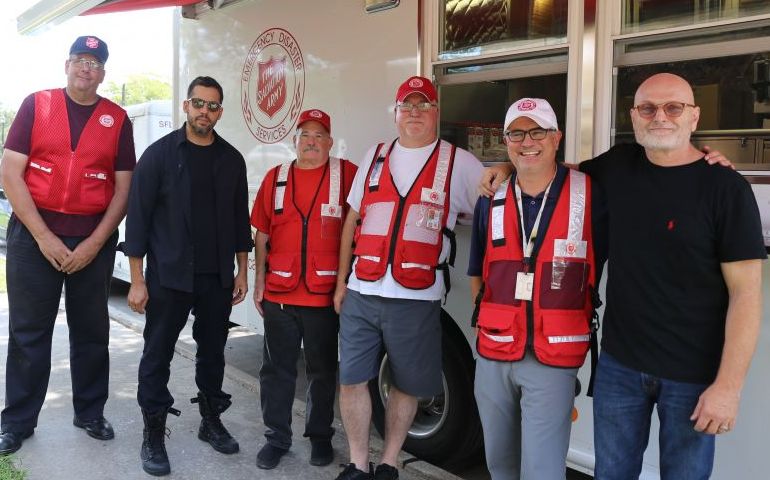 Houston, Texas (September 5, 2017) – A morning routine at the parking lot adjacent to The Salvation Army Northwest Corps Community Center on Windfern Street has developed over the past week. Salvation Army mobile feeding units from Georgia, Kentucky, Tennessee, and Texas assemble each day in preparation for their role in providing relief to Houston in the aftermath of Hurricane Harvey. This morning the routine was disrupted when instead of stocking up with cases of water, food, snacks, and cleanup kits to head out to Houston neighborhoods, eight of the mobile feeding units headed back to Florida in advance of Hurricane Irma making landfall.

Property Manager Mike Lariviere and two volunteers from The Salvation Army Ocala left for Houston on August 29, finding blocked roads that caused them to take an alternate route 200 miles north of Baton Rouge, Louisiana, despite their plans to join a canteen convoy heading to Houston from Pensacola. They eventually rolled into Houston late Thursday night and were at work the following morning, providing food and water via their mobile feeding unit, also known as "Canteens."

“I’ve been on disasters at home, with two or three canteens,” said Mike, “but to pull in each morning and see up to 40 canteens lining up was overwhelming.”

Jumping on board the Ocala canteen, was a Salvation Army emotional and spiritual care volunteer. Stocked and ready to roll, Mike and the Ocala canteen headed to a Houston apartment complex that was flooded with water up to the second story. “It was great to see the residents’ reaction as we pulled up,” said Lariviere. After two days in that community, the Ocala canteen was sent to the Spring Branch ISD’s Darrell Tully Stadium following a call from a former Salvation Army advisory board member. “It was a staging area for first responders, many were former military, and they needed to be fed and comforted,” said Lariviere.

By the weekend, the media was reporting on the next building storm in the Atlantic-- Hurricane Irma. The Ocala canteen team started getting calls from home and spent their limited down time “glued to the Weather Channel.” While it may seem too early to know for sure to what extent Hurricane Irma will impact Florida, The Salvation Army isn’t taking any chances. The Ocala canteen team got the word from Salvation Army Emergency Disaster Services that they would be heading back to Florida today, meeting the convoy in Pensacola for their final orders by nightfall.

“It hurts to leave Houston because there is so much that is needed and so much we still don’t know about what will happen with Irma. And it could be a lot more than just Florida impacted,” said Lariviere.

The morning routine continues even as Florida operations are in full force. More than 20 mobile feeding units and teams now head out from downtown Houston each morning to meet essential needs in the Greater Houston Area.

Major Melody Davis, Associate Area Commander in Houston, encouraged them on their departure, “Florida needs you just like we did. With God before us, behind us, and beside us, The Salvation Army will continue to comfort and heal those in need.”

(PHOTO CAPTION)
Celebrity Magician David Blaine stopped by one of the Houston shelters to give a little cheer to Harvey survivors and take their minds off the situation, even if for a brief moment. Pictured to Blaine’s left are Tim Read, Sr., Mike Lariviere, and Renee Moore from The Salvation Army Ocala, Florida, now on their way home to Florida.
About The Salvation Army
The Salvation Army annually helps more than 23 million Americans overcome poverty, addiction, and economic hardships through a range of social services. By providing food for the hungry, emergency relief for disaster survivors, rehabilitation for those suffering from drug and alcohol abuse, and clothing and shelter for people in need, The Salvation Army is doing the most good at 7,600 centers of operation around the country. In the first-ever listing of “America’s Favorite Charities” by The Chronicle of Philanthropy, The Salvation Army ranked as the country’s largest privately funded, direct-service nonprofit. For more information, visit www.SalvationArmyUSA.org. Follow us on Twitter @SalvationArmyUS and #DoingTheMostGood.