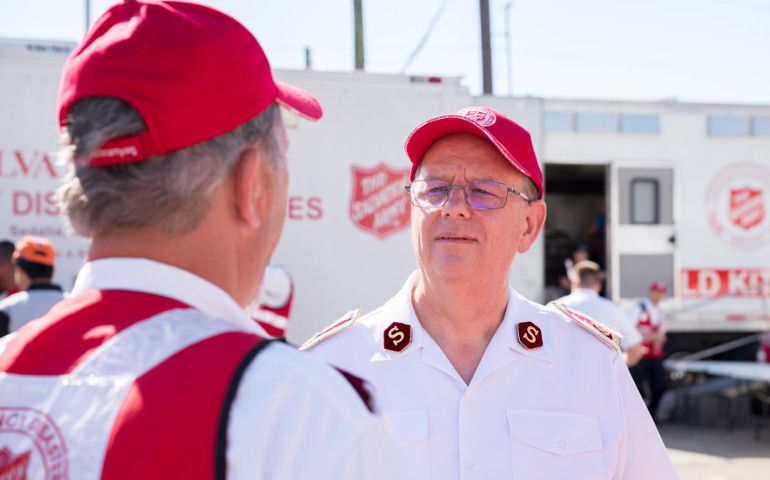 On Thursday morning, as teams prepared to depart for another busy day providing meals, cleanup kits and food boxes to neighborhoods throughout Houston, General Cox talked with crews and thanked them for their faithful and tireless service. The General also saw staff of the field kitchen in action as they prepared food for the day. The sight was impressive, as the unit has the capacity to provide 15,000 meals daily. Later, as food boxes and supplies were distributed to grateful survivors, General Cox spoke to residents and gave them the assurance that, “God loves you, The Salvation Army loves you, and we will be here to help.”

Incident Command teams continue to coordinate extensive Hurricane Harvey relief efforts in five areas of Texas: Houston, Victoria, Beaumont, Corpus Christi, and Dallas Fort Worth. Recent days have seen some transition in personnel as initial deployments end and replacement staff are rotated into key positions. A redistribution of staff and resources is currently underway due to the threat and anticipated response to Hurricane Irma in Florida. Needs for services, equipment, and personnel are being evaluated in each location to make sure we are efficiently and appropriately meeting the ongoing needs in Texas.

As of Sept. 7, The Salvation Army has served 311,955 meals, 255,522 snacks, and 321,093 drinks statewide in response to Hurricane Harvey. Emotional Spiritual Care Officers have spoken with 21,411 first responders and survivors; employees and volunteers have provided 42,938 hours of service.

You can support the ongoing relief work of The Salvation Army by making a financial donation at to www.helpsalvationarmy.org, calling 1-800- SAL-ARMY, or texting STORM to 51555.

For the latest information please go to www.disaster.salvationarmy.org and watch for regular updates on our social media pages at www.facebook.com/salvationarmytexas and www.twitter.com/salarmytx. To access photo and video resources related to The Salvation Army Hurricane Harvey relief efforts please go to www.salvationarmysouth.org/harvey.