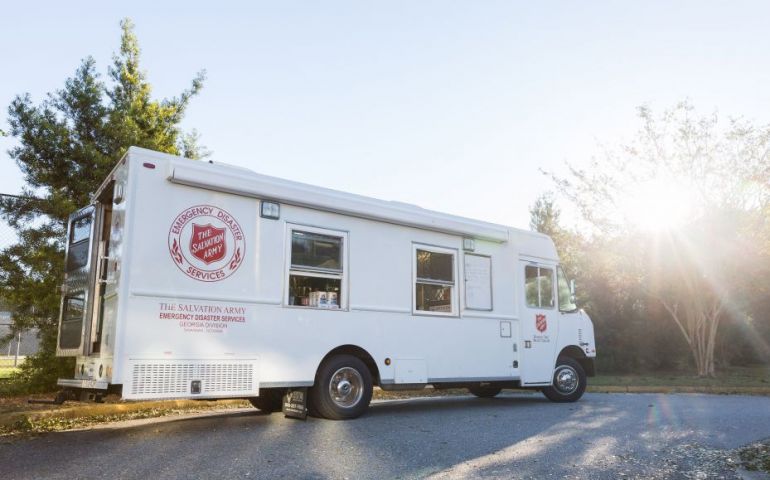 ATLANTA, GA (September 9, 2017) – Irma is intense, powerful, and huge. These types of hurricanes are bad news.

It isn’t a kind forecast in store for Florida and Georgia as Irma relentlessly churns its way toward the U.S. Over five million Floridians and over half a million Georgians were asked to evacuate ahead of the massive storm taking aim to cut a swath of devastation up the Florida peninsula and into Georgia. Georgia Governor Nathan Deal placed 94 counties in South Georgia under a state of emergency. Meanwhile, President Donald Trump signed an emergency declaration Friday authorizing federal disaster aid for 30 southeast Georgia counties bracing for possible destruction from Irma.

Heeding the calls of warning from government agencies, and the call of a large anticipated need in their home state, ten Georgia Salvation Army mobile feeding units (canteens) serving in Texas as part of Hurricane Harvey disaster relief, turned to head back east. They should all arrive back in Georgia by today. After quick refurbishment and a change of teams, they will join seven canteens in Georgia waiting to join them to provide help and hope to people in their time of need. The Salvation Army will replace the Georgia units serving in Texas with other units from across the country, so that Hurricane Harvey disaster relief can be sustained effectively.

The Salvation Army formed an Incident Management Team (IMT) for operations in Georgia to monitor the storm and communicate with state and local officials to coordinate efforts and respond effectively. The team met for the first time yesterday to strategize how best to monitor and respond to the changing circumstances. In times of disaster, The Salvation Army traditionally serves and prepares meals from its mobile canteens, helps distribute cleaning supplies, and offers emotional and spiritual care to those impacted.

“We continue to assess and evaluate the situation,” says Major Douglas McClure, Incident Commander for the Georgia Incident Management Team, “Once we see exactly how the storm impacts our state, we will be able to redeploy our resources as needed to help those in the most severely affected areas.”

Nothing about Irma will be easy. This is the largest hurricane evacuation in U.S. history, and many of the evacuees are in, or headed to, Georgia. The Salvation Army of Georgia is already in action providing meals in 18 key locations for evacuees and those seeking help in Georgia including; Albany, Augusta, Dalton, Douglas, Dublin, Macon, Thomasville, and Waycross.