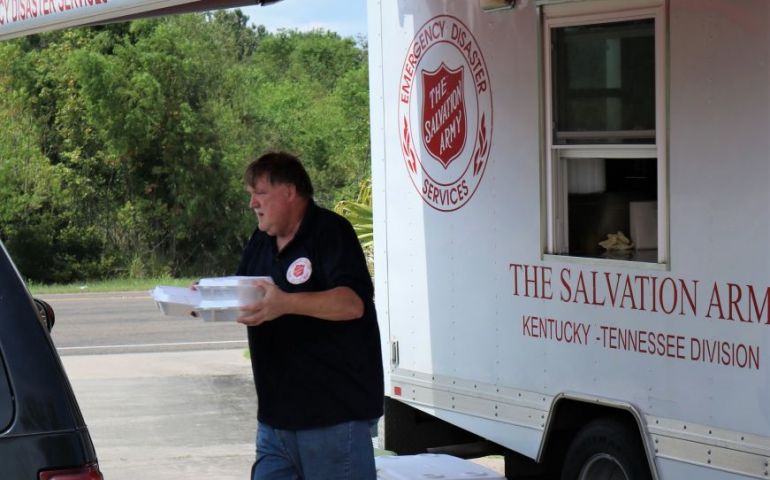 Beaumont, Texas (September 11, 2017) - Bill Jackson and his wife Shelly make their home in Knoxville, Tennessee where Bill works for The Salvation Army. But right now, Bill is part of The Salvation Army’s relief team responding to Hurricane Harvey’s devastation in Texas and Shelly is hunkered down in West Palm Beach, Florida riding out Hurricane Irma.

Bill drove a canteen (mobile feeding unit) from Knoxville, TN to Beaumont, TX as part of the crew responding to serve Harvey survivors. At the same time, Shelly went to be with their daughter in West Palm Beach.

There’s a star on the calendar by September 14. That’s the day Bill and Shelly expect the arrival of their new baby granddaughter….in West Palm Beach, Florida. Afraid to travel so close to the due date, Bill’s daughter, Ashley, and son-in-law, David, along with Shelly, have taken all the steps they can take to prepare for the impending storm.

“They have storm shutters screwed in, plenty of food and water, a generator and extra fuel,” Bill said as he impatiently talked, knowing he needed to be getting his feeding unit ready to serve Sunday lunch to those who come to The Salvation Army for a hot meal after losing so much in the flood waters Harvey dumped on southeastern Texas.

When asked why he came to Texas, Bill’s reply was simple, “It wasn’t my plan, it was the one God gave me.”

Bill has a heart for service, and that passion shines through with every action he takes. “It’s what we’re called to do as Christians, we serve others.” Bill shares with a smile. He and his fellow Salvation Army workers put in long hours and do it with genuine interest in others and in Christian love.

“I try not to worry; I know my family is in God’s hands.” Bill shared, “But, I can hardly wait to see my new granddaughter.”

Bill doesn’t serve for the recognition, but we certainly thank him for his selfless service. And we pray for him and his (growing) family; that they may be safe and find peace.

Bill’s life is a lesson on servant leadership; one we can all learn from. We are all called to action; Bill’s call took him to Texas, even as his wife headed to Florida. Not everyone can pick-up and head to a disaster site to serve, but we can all make a difference in the lives of others.