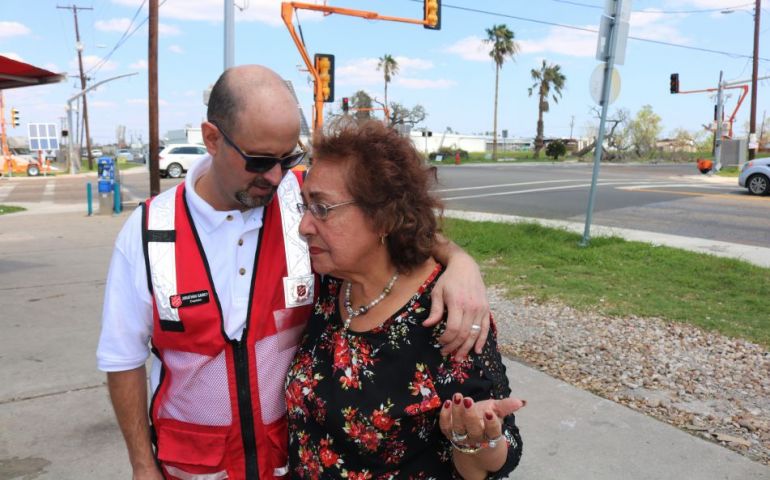 Rockport, TX (September 13, 2017) -  A fleet of 79 Salvation Army mobile feeding units, each with the capacity to serve up to 1,500 meals a day, are currently serving meals to thousands of people affected by Hurricane Harvey in Texas. For one family in Rockport, a food truck, much like that of The Salvation Army’s, actually saved their lives.

Adolph Garcia and his two children were in their home as the eye of Hurricane Harvey headed directly for Rockport. As the storm approached, Adolph hastily gathered his children and sought refuge in a family owned food truck which was parked by the house. The family watched in horror as the powerful storm, with damaging winds gusting 110 mph, demolished their home.

Although they survived the storm, the place that Adolph called home for the past 20 years is gone.

Adolph’s children are currently staying with his mother, Maria, in Gregory, TX, whose home was also impacted by the storm. Now with more mouths to feed, Maria has been grateful to get hot meals and refreshments from The Salvation Army unit serving in Rockport.

Emotional Spiritual Care Officer, Captain Jonathan Gainey, had the opportunity to pray with Maria as she thanked God for sparing her son and grandchildren from the disaster. “The people in these communities have been devastated by Hurricane Harvey and many have lost everything,” said Captain Gainey. “The Salvation Army is here to provide for their physical needs, with a hot meal and a bottle of water or cup of coffee, and we are blessed with the opportunity to talk with survivors, listen to their stories, and most importantly pray with them.”

In response to Hurricane Harvey, The Salvation Army has provided more than 484,079 meals for disaster survivors and first responders and provided emotional and spiritual care to more than 26,000 people to date.