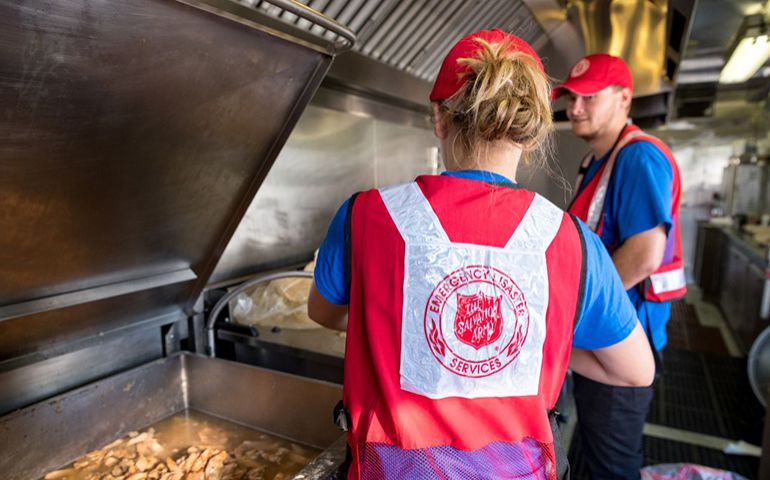 Houston, Texas (Sept. 13, 2017) - The big gun in The Salvation Army's arsenal of mass feeding disaster response equipment is the 52-foot field kitchen, now stationed in a downtown Houston parking lot in response to the Hurricane Harvey relief and recovery efforts.

A team of five staffs the kitchen operations, keeping it humming from dawn to dusk and cooking up to 8,000 meals daily. Karmen Gillingham, food services director for The Salvation Army Hoblitzelle Camp and Conference Center in Midlothian, Texas, manages this massive feeding unit with camp kitchen staff Wesley Martin and Cayte Housley. With most camp kitchen staff returning to school, she recruited summer camp program staff Katelyn Anderson and Tyler Ellis to round out the team. The five-person team works together to plan, prepare, move out, and clean/prep for the next day.

“This is my first disaster deployment with The Salvation Army and my first time working in the field kitchen at this scale,” said Gillingham. Camp Hoblitzelle briefly used the field kitchen during a camp session when some equipment was down in their facility. The 100-inch wide trailer kitchen looks a lot like traditional commercial kitchens, with tilt skillets, a walk-in refrigerator and freezer, and a bank of high-capacity coffee makers.

Gillingham and her team begin their day at 5:30 a.m. each morning, preparing breakfast for volunteers along with lunch and dinner that goes out on more than 20 mobile feeding units dispatched to communities throughout Greater Houston by 11:30 a.m.

After a short break in the action, they clean and reset, then stage everything to make the next day faster and more efficient. Steps away from the kitchen, in the downtown Houston parking lot, sit three trailers containing refrigerated and frozen food, as well as dry goods. “After canteens roll out we inventory the shipments coming in and the donated and purchased food we have available to create meals,” said Gillingham. This week the team has worked with Major Ronald Mott on the incident command team to ensure that a two-week menu plan is in place after this kitchen team heads home this weekend.

By 6:30 p.m. the kitchen is cleaned and ready for the following day. “It’s been great working with this team and seeing how positive they can be while juggling so many demands,” said Gillingham. She shared a story about how for the first few days, they used a standard manual can opener to open hundreds of large cans of food. Their blistered hands finally got relief this week, when a commercial can opener was installed in the kitchen.

In large disasters, Salvation Army Emergency Disaster Services use the “hub and spoke” method of feeding. The field kitchens are the “hub,” with the capacity to produce up to 15,000 – 20,000 meals a day. The mobile feeding units, also called “canteens,” are the spokes. The canteens can roll out to where the need exists for meals, snacks, drinks, and comfort. Many of those units can also cook and prepare food as needed.

Since the Army first started using the kitchens in 1997 – and especially after 9/11 -- innovations and improvements were made to increase capacity and safety, such as replacing traditional ovens with convection ovens. “Disaster by disaster, improvements were made. We learned things we could do and learned things we shouldn’t do,” said Kevin Smith, Director of Disaster Services for The Salvation Army Florida. Smith served as the incident commander in Houston before being called back to Florida to ready efforts for Hurricane Irma.

“We look forward to the early evening when we hear such touching stories from those who move out the food we prepare to communities in Houston,” said Gillingham. “It is an honor to be at the hub of what’s going on with the feeding efforts, and we want to do everything we can to help.”