Volunteers and Canteens: Partners in Serving with The Salvation Army 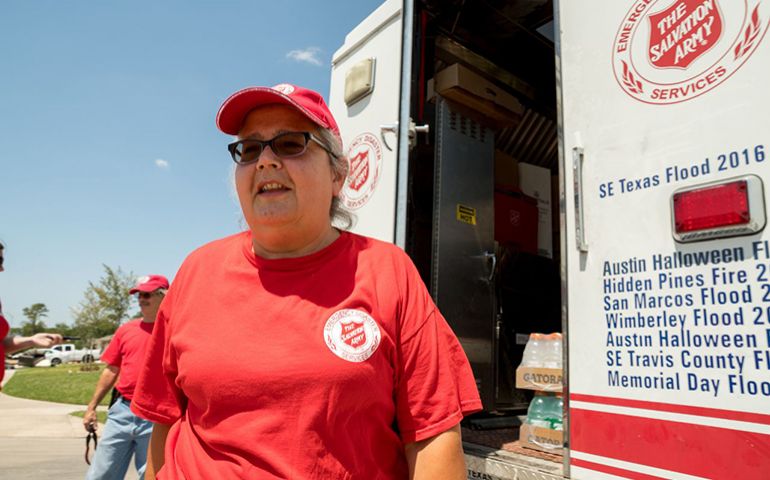 (Houston, Texas) - The blazing sun in the cloudless Houston sky brought no relief to the residents cleaning out their Hurricane Harvey ravaged homes.  But amidst the piles of dry wall, furniture and refrigerators along Seeker Street, a Williamson County (TX) Salvation Army mobile kitchen stood out like a beacon.

“We’ve been pushing out 1,000 meals over the last couple of days,” said Mike Marshall, a Salvation Army volunteer from Georgetown, Texas.

Mike and his wife Sandy were at the helm of the behemoth, serving platters of chicken, carrots and rolls to hungry hurricane survivors. The truck is a veteran of disaster response deployments dating back to Hurricane Katrina in 2005.  The incidents are listed in bold on the vehicle’s back doors and include floods, fires, hurricanes and a chemical plant explosion - emblematic of The Salvation Army’s service, the lives that have been transformed and the dedicated volunteers like the Marshalls.

“Last year was a busy year,” said Mike. “But with any disaster, you still have people. They all have the same needs. We feed them.  Try to do as best we can.”
Volunteer bell ringers at Christmas, Mike and Sandy have been donating their time and energy with The Salvation Army’s Emergency Disaster Services for the past 18 months. As retirees, they like to spend their spare time helping people in need. The Marshalls have gone all over Texas and as far as Baton Rouge to provide first responders and disaster survivors with food, comfort and a listening ear.

“I just can’t imagine what the people are going through because I’ve never been through a flood,” Sandy said. “Baton Rouge was an eye opener because it was just neighborhood after neighborhood (of flooding) and it didn’t matter how much money you had, how big of a house, or if you lived in a trailer park.”

As soon as they got the call to deploy for Hurricane Harvey relief, the Marshalls were on the road with the canteen within 90 minutes.  They’ve served in the affected areas of Victoria, Sea Drift, La Grange and Houston in the last two weeks. “Everybody is smiling and saying ‘God bless you,’” said Sandy. “I know this means a lot to people to have a hot meal.”

Sandy and Mike are among thousands of volunteers assisting with Hurricane Harvey relief. Despite the hot temperatures, long days and crisis situations, the Marshalls are committed to “doing the most good” with The Salvation Army, waiting to hear if they will head to Florida next to aid in Hurricane Irma relief.

“Monetary donations always come in, but not as many volunteers so that’s what I wanted to do,” Sandy explained.

In the meantime, the Williamson County canteen continues to crank out meals in Houston.  With 15 years and 12,000 miles behind it, the Marshalls consider it dependable and ready to serve at a moment’s notice.  If the truck could talk, you can only imagine the stories of the people and the places, but the only tell-tale sign of its significance is that list of historic deployments on its back doors. Soon there will be a new name to add and that alone will be enough: Hurricane Harvey, 2017.