Age has no limits for Salvation Army volunteers 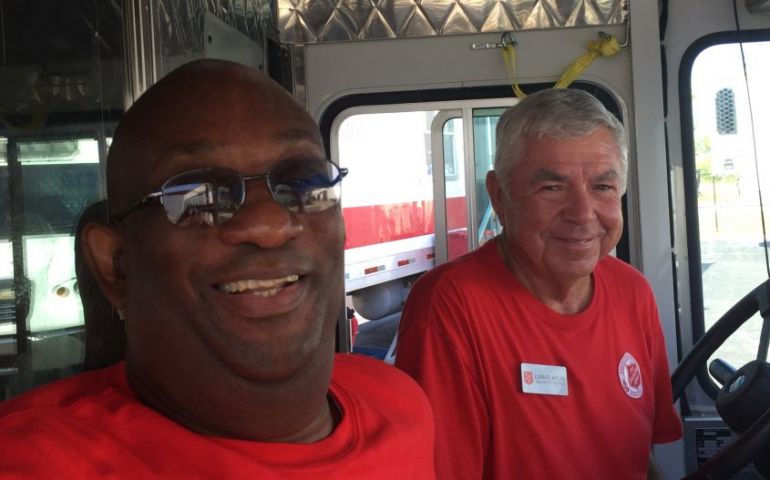 (Fort Myers, Fla.) Sept. 16, 2017 -  Lamar Aplin could be doing a lot of things on a stifling Saturday afternoon in southwest Florida. The 70-year Dothan, Alabama, retiree chose to be a days’ drive from home, checking his Salvation Army canteen and readying for dinner service in Lee county. Alpin has been serving on a disaster canteen since he retired from his insurance job more than 15 years ago.

“Alabama tornadoes, Gustav, Katrina, Rita…,” he said as he began to list off his disaster experience. “I’m retired and I want to serve.”

In season, retirees like Alpin can make up to half of a volunteer base at many Salvation Amy Corps or Area Commands in Florida. Seniors often volunteer for Christmas but can be a rarity during disasters given the strenuous activity.

“I’ve got a little arthritis in my knees but that’s it,” said James Bigam, 69.

Bigam said he’s looking forward to serving the community. “There’s a difference between a job and serving,” Bigam said. “My job was in the U.S. Army and then as a civilian for the Army. Volunteering for The Salvation Army isn’t a job. We’re providing a service.”

Bigam is a newly minted Salvation Army volunteer. He saw a story on the local news a few weeks ago and his wife told him to sign up.

“I think there were 15 of us in that initial meeting with the Captains,” he said. “A few of us took the classes and now I’m here.”

He and a canteen crew served Florida evacuees in Dothan. A few days later he received a call to come to Florida.

“When you’re retired, every day is a Saturday so why not use it to help people,” he said. “Plus, my wife said I needed to volunteer.”