After Andrew... After Irma... The Salvation Army Serves in Homestead, FL 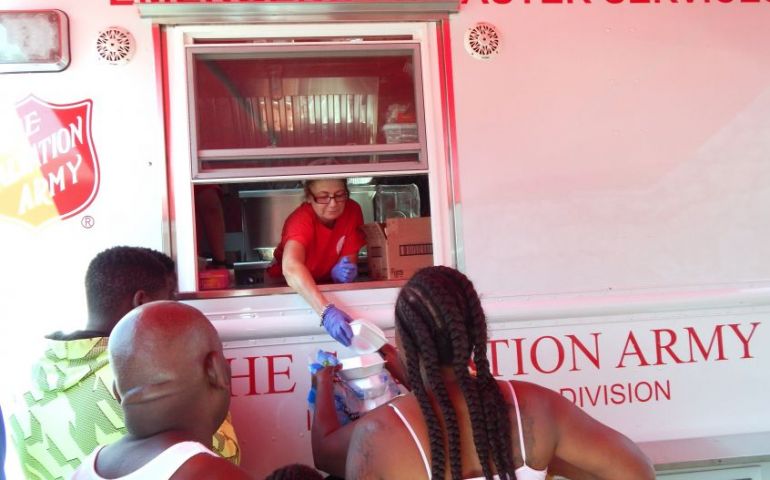 (Homestead, Fl) - Janice McCray remembers the freight train sound hurricane Andrew made as her and the 13 members of her family huddled in a windowless restroom on the third floor of her apartment 25 years ago last month.

“We opened the door to the restroom, walked out and looked up,” she said, “our roof was gone.”

Twenty-five years later, Janice once again huddled in a restroom and waited for Hurricane Irma to skirt the Miami suburb that was once devastated by Hurricane Andrew.

“They told us to expect an Andrew-like hurricane,” Janice said as she walked along her street, littered with debris from hurricane Irma. “Andrew was smaller but did a lot of damage. Irma covered the entire state. We weren’t sure what to expect.”

And just like 25 years ago, The Salvation Army continues to serve where the need is most great – in this case its Janice’s neighborhood, Homestead Gardens. A Salvation Army mobile kitchen roved around the neighborhood and served peanut butter and jelly sandwiches, by the afternoon, they were serving hamburgers to residents who still didn’t have electricity.

“Everything in the fridge has spoiled,” said resident Samuel Orellana, “I’m so glad for this food.”

One by one, residents huddled under the canteen awing and out of the sun and gratefully accepted a meal. A Salvation Army team member from Canada helped translate from French to the mostly Creole speaking residents. Neus Lenous doesn’t speak English very well. He immigrated to south Miami from Haiti. Irma was his first hurricane.

“The [Haiti] earthquake was scary,” he said, “at least we had a little bit of a warning for Irma.”

The fact it was the 25th anniversary of hurricane Andrew wasn’t lost on pastor Samuel Jocelyn.

“Andrew was a monster,” Jocelyn said. “Irma is an inconvenience- at least we still have our homes, the power will come on eventually."

By the time lunch service wound down, the electricity in McCray’s tiny apartment finally came on.

“Power,” she said, “at least we only had to wait a week, instead of almost a month in Andrew.”