Twenty-Two Workers from Six States in Sebring, FL With One Goal: Bringing Hope 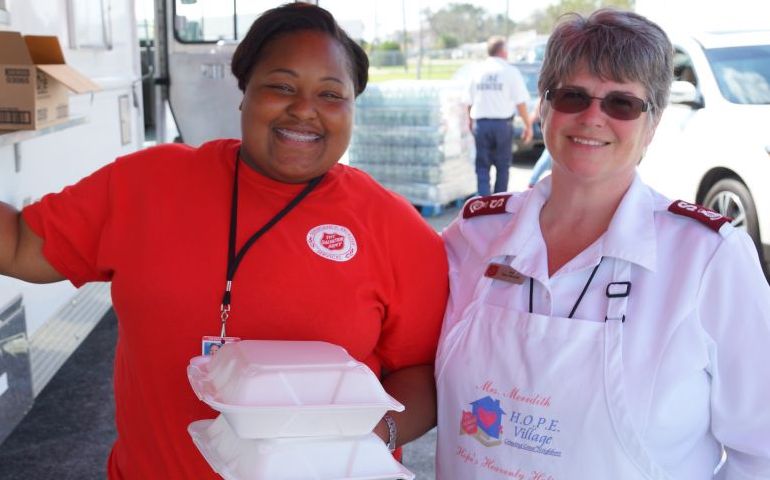 (Sebring, FL) – Hectic doesn’t begin to describe the last three weeks for The Salvation Army across the southern United States. Two major hurricanes in Harvey and Irma, and potentially a third in Maria. Canteen crews, staff, volunteers and equipment from all over the country have converged on Texas and Florida, and will for the foreseeable future. That makes for some pretty interesting staffing situations.

Like here in Sebring, Florida, officers, staff and volunteers from Louisiana, Mississippi, Alabama, Kentucky, Tennessee and Florida are working side by side to prepare and distribute thousands of meals and drinks each day.

“I think it’s great,” said Victor Rutledge, who manages the Kentucky-Tennessee Division’s summer camp, Camp Paradise Valley. “To work with folks from other areas, connect with them, that’s the neat part of this.”

With this assignment, Rutledge ran into now McComb, Mississippi Corps Officer, Lieutenant Thomas Marion. Rutledge served as Marion’s summer camp counselor several years ago. They haven’t seen each other in eight years. Lieutenant Marion says the combination of staff from across the South and the country doesn’t have that big of an effect of the operation.

“We are all here for the same goal. It doesn’t matter where they’re from. It’s fun hearing the different accents,” said Lieutenant Marion.

In Sebring, first-time disaster volunteer, Laderious Dowell from Memphis, Tennessee is working side by side with an experienced veteran, Ronnie Cicchitto from Tampa, Florida who is serving meals from a mobile feeding truck in his fourth disaster.

“We all work well together,” said Cicchitto. “Everyone helping the residents in ways only The Salvation Army can.”

“The way the people feel when they see how much we care, they were saying we are the only people who do care for them,” said Dowell.

In the four days of service since the team has arrived in Sebring, Florida, nearly ten thousand meals have been served to Highlands County.