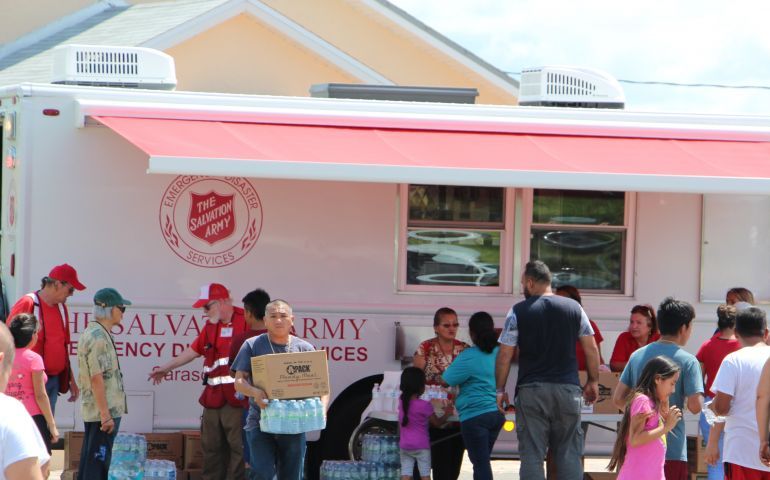 (Fort Myers, FL) - One week after Hurricane Irma made landfall in Florida, The Salvation Army in Fort Myers continues to serve residents who are still without power. For many, hot meals served by The Salvation Army are the only meals they have had since before the storm.

“It’s been a rocky road for us,” said Sharon Redman. “We’ve been trying to manage, but we’re doing the best we can by the grace of God.” Redman and her family of seven have been scraping together anything they can salvage from their cupboards to sustain them. While there is no clear timeline for power to be restored to this community, they are thankful for the hot meals that The Salvation Army has given out for the past three days. “It’s a blessing. A true blessing,” she says.

Redman and her family are not alone. Communities across Lee County have built upon close-knit foundations to serve each other in a time of crisis.

The Salvation Army has worked alongside volunteers from the Lehigh Senior High School (LSHS) community for three days to provide meals and a respite from the heat.  LSHS employee Jill DelRio describes it as something beautiful. “We don’t call it a high school,” she says. “We call it a house. It’s our family.” Principal Jackie Corey opened up the cafeteria and gymnasium to families at dinner as a refuge from the heat and a place for fellowship despite damages to other parts of the school. Students, teachers, parents and employees, many of whom were impacted by Hurricane Irma, have volunteered to help The Salvation Army serve meals to their friends and neighbors. “We have a beautiful family,” said DelRio.