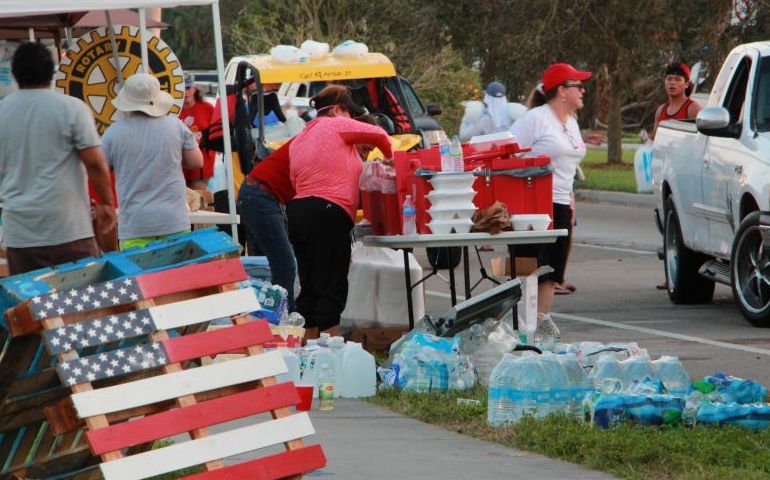 (Bonita Springs, FL) - The Salvation Army has been serving lunch and dinner to residents in Bonita Springs who have traveled in thigh-high water, some in boats, to receive a hot meal and hydration. A number of blocks in the area are still without power.

Don Manley, Estero, FL resident and member of the local Rotary Club was in the area to lend a helping hand. After Don Manley and his wife finished working in the shelters in Lehigh Acres, they arrived home and were able to get some sleep. Their house fared well so they went out looking for something to do. Don came across a man floating on a tire down the street, trying to get to his house. “Let's get my boat,” Manley said.  Since that day, Manley has taken hundreds of people back and forth to their homes.

“The first time I take them to their house, it’s shock and disbelief. Maybe they grab a few things,” Manley said. “The next time, they are grabbing important papers and photographs. The third time, they have a plan.” It’s a distinct pattern that happens time and time again as residents move from shock to planning for the long-term.

There are only a handful of families remaining out of approximately 200 homes. The rest are out living with relatives.  Manley and the Rotary have been working hard to help feed and hydrate their neighbors in need. “The folks from The Salvation Army… every time we think we are out of something, a truck from The Salvation Army shows up. It’s just amazing,” Manley said. “I wouldn’t call it a miracle, but it’s awful close. I’m seeing human kindness at its best.” In one afternoon, The Salvation Army served 262 sandwiches, 264 bottles of water and cookies and chips on the side.

Lorie Stanley’s house is dry, but the road leading up to it is under water. “There’s a tree on top, the fence is gone, but our road is inaccessible so we’re walking in and out,” Stanley said. “Yesterday, there was an alligator on my road.” When asked how she felt when she saw The Salvation Army in her neighborhood, she was in tears. “I’m so grateful, I’m so grateful, you can’t even believe it. You guys are only the second people I’ve seen out here,” said Stanley.

Dave Dragoo lives in a mobile home park in Bonita Springs. He hasn’t been able to get back to his home yet because of the high water. “My daughter was here about a week ago and the water was just a little bit past her waist,” Dragoo stated. During the storm, Dave and his wife stayed at the Days Inn next to the I-75 Interchange. “Staying there was ok going through the storm. The power stayed on. After the storm, power was lost,” Dragoo said. “After we went a week without power there, it was pretty rough. No food, nothing in there. Pitch black at night. You couldn’t see your hand in front of your face.” The water is taking its time to drain off. It’s so slow, Dragoo envisions it taking a month to drain. He hasn’t seen anything change since he was in the area three days ago. “The water hasn’t gone down much at all,” Dragoo said. “I just feel like nothing is going on here. I kind of feel like the land that time forgot. We’re just sitting here treading water.”

When asked how he felt when he saw The Salvation Army and The Rotary Club here, he said that he felt great. Right off the bat, the first couple of days, there were people in with water and emergency food. “I talked to one guy who was all the way from California,” Dragoo said. “I thought that was pretty darn good. All the way from California to help us out.”

Response efforts to this hurricane and flooding are expected to be costly and last for years. The best way to help after a disaster is to make a financial donation.