Care Will Continue After the Last Canteen Rolls Away 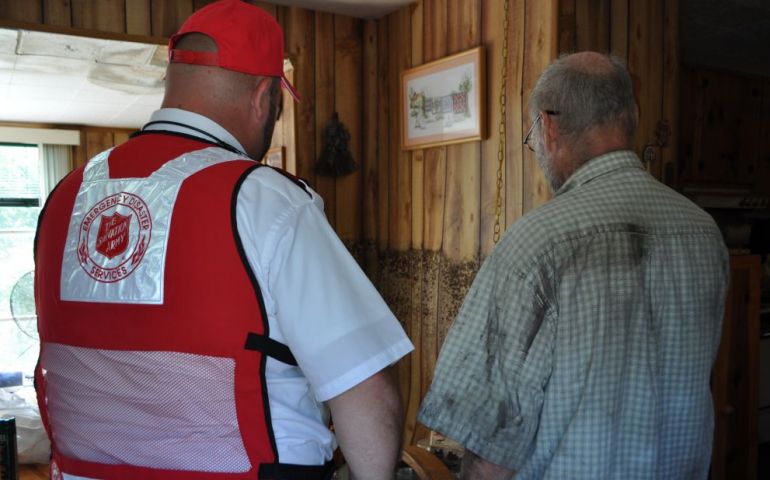 Middleburg, FL (September 19, 2017)— Vernon is 79 years old and a veteran who spent two years in Vietnam. His eyes are clear blue and his smile is wide. He is a widower who lives on Black Creek in a single-wide trailer on the lot he and his wife bought 40 years ago. A long dirt driveway leads to his house which is partly hidden by trees. Wide wooden stairs lead up to the house and lattice skirts the ten-foot gap between his home-on-stilts and the ground.

Vernon’s house was flooded in Hurricane Irma. He lost everything.

“I was watching the weather and something told me to get out of here, so I got in my truck and drove to Georgia,” Vernon told Lieutenant Karl Bush of The Salvation Army of Winston-Salem, North Carolina. “I came back and have nothing left. My whole life is in this house.”

Inside, Vernon’s home is decorated the same as it was when his wife died, but mold from the floodwater is beginning to cover the walls. Wet furniture sits rotting in the humid air. A photo of Vernon and his wife the day they moved into the house hangs on the wall. Floodwater has stuck the photo to the glass in the frame.

“I followed a muddy driveway and came up to Vernon’s house,” said Lt. Bush. “The front door was open so I called out to see if anyone was home. Vernon came out and told me to go away –I told him I just wanted to talk to him.”

Vernon motioned to a chair on his porch and he began to tell Lt. Bush his story. His wife died seven years ago. Since the flood he had been sleeping every night on his wet sofa. He hadn’t eaten in a while but he didn’t want any help. He had one daughter, but he hadn’t talked to her in a while. He used to love to fish, but what was the point any more?

Vernon was lonely, angry, and just lost everything he ever owned.

“My house would have lasted forever,” he said. “If it hadn’t been for that dang water getting inside everything would be great. I can’t believe God did this. ”

Over the next couple of days, Lt. Bush carved out time every day to sit on Vernon’s porch and visit. Slowly, Vernon opened up and began to accept the help that was offered. He ate the food that was brought to him. He gave Lt. Bush his daughter’s phone number so he could reconnect with her. He agreed to meet Lt. Jeff Marquis, the local Salvation Army officer for Middleburg, so he could have someone to talk to after Lt. Bush returned home to North Carolina. A proud, lonely man was beginning to open up.

This is not the end of the story, however.

Connection. Community. Continuous care. We were here serving before the flood and we will stay here until we are no longer needed. We are here for Vernon and we are here for others who need us. We are The SALVATION Army, here to meet human need in the name of Jesus Christ without discrimination.