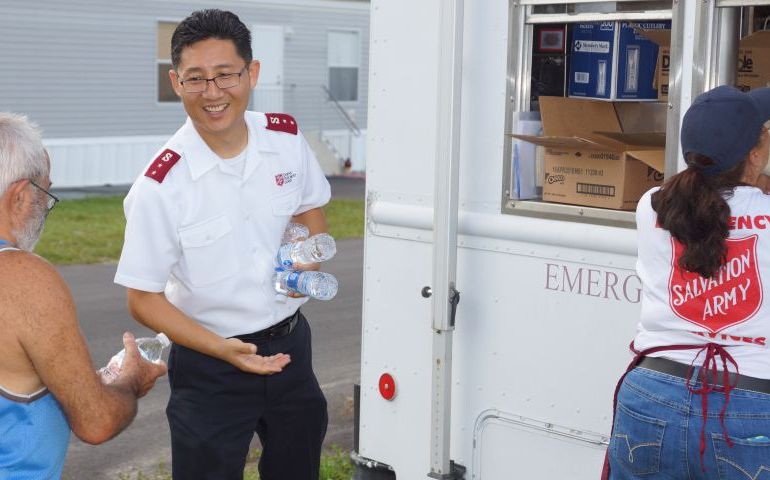 Fort Pierce, FL. – Four short months ago, The Salvation Army of Martin County, Florida’s service area was enlarged, adding St. Lucie County to the north. Corps Officers, Captains Samuel and Christine Kim knew their lives would be busier than before. Little did they know Hurricane Irma would have something to say about that.

Luckily for the Kims, Stuart, Florida where their Corps is located received very minimal damage. They’ve been able to focus their attention north to Fort Pierce and west to Okeechobee.

“One of our canteens was needed in Fort Lauderdale, so we sent this one to Fort Pierce, and my family and I delivered meals in our van to Okeechobee,” said Captain Samuel Kim.

The struggle has been the driving time to reach each location, both nearly an hour from the Corps where they cook the food. The Kims, their volunteers, and staff have stepped up, serving 1,300 meals since last Thursday.

“The conditions are really poor, especially here in Fort Pierce,” said Captain Kim. “Power is returning, so things are getting better, and we’re just trying to make sure basic needs are met.”

The community is very grateful for their efforts, especially in this mobile home park where residents say their water well was damaged by a tornado during Irma.

Angela Bass lived through Hurricane Andrew and its aftermath, but with Irma, she didn’t have a place to evacuate to ahead of the storm. Angela, her husband, and six children stayed behind.

“This really warms my heart,” said Bass. “It’s wonderful. I have one less thing to worry about tonight.”