Reaching the Unreachable - No One is Ever Forgotten 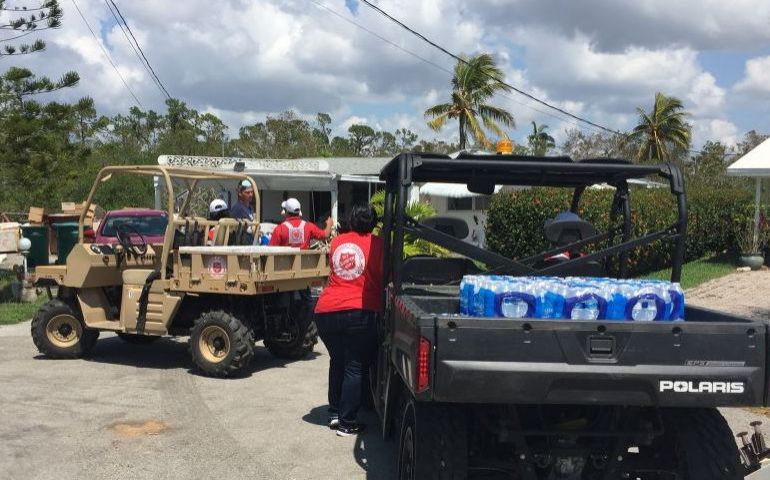 Naples, Fla. (Sept. 19, 2017) – When you still have critical needs more than a week after the storm has passed, when you feel like you're one of the last ones to have your power restored, and when you feel like the last one to be asked "how are you doing," you grow used to feeling forgotten. So, when you hear the sound of a utility terrain vehicle (UTV) making its way down your narrow street, which is partially hidden by tree branches and lined with deep holes, you are surprised – very surprised.

“I could not believe my ears,” said Bob.  “We are used to taking care of ourselves in our neighborhood because no one else seems to care.  We are the ‘forgotten’ ones.  When I heard the vehicle and saw The Salvation Army loaded down with supplies, I was stunned – pleasantly stunned.”

On the UTV, donated by Polaris Industries, was Captain Ricky Perez, the Corps Officer for The Salvation Army in Naples.  “We were canvassing the neighborhoods looking for people to help,” shared Perez.  “These vehicles allow us to get into places that our larger vehicles cannot access.  We wanted to reach those that are usually unreachable.”

Captain Perez was able to provide Bob, as well as his neighbors, with shelf-stable meals, water and a promise he would send hot food later.  Bob did not believe him.  After all, he feels his neighborhood is always forgotten.

Of course, Captain Perez did not forget.  He ensured a small mobile food service unit made its way to Bob and his neighbors, and he has checked on him every day.  Bob is overjoyed.  “Our homes may be raggedy but we are people, too,” explained Bob.  “I thank The Salvation Army for truly seeing ‘me,’ not my circumstance.”