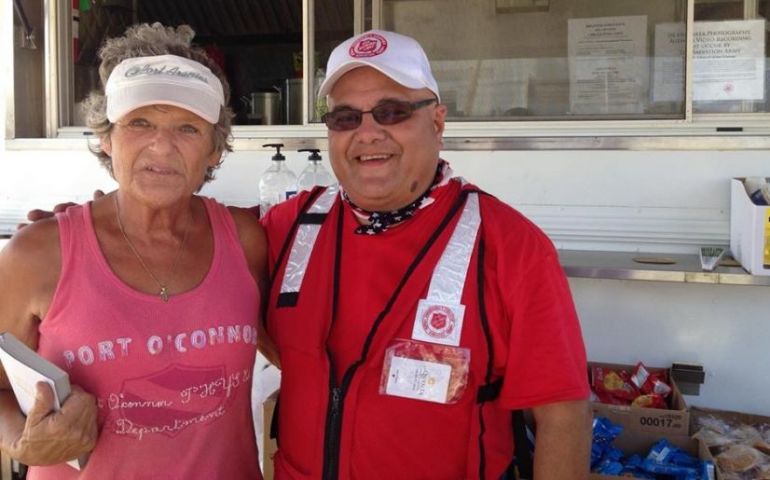 Port Aransas, Texas (September 21, 2017) - “When the hurricane hit there was no media here to let people know how badly we got hurt and how devastated our community was,” said 66-year-old Port Aransas resident, Bonnie Schmolbach.

Bonnie and her husband were preparing to live out their retirement in Lorida, Florida. They had recently remodeled their Port Aransas home to sell and were just two weeks away from moving when Hurricane Harvey made landfall over Port Aransas. The storm flooded Bonnie’s home, destroying her furniture, drywall, appliances, and hardware. “We lived there for 17 years. It's so hard to take it all in and my husband breaks down every day,” said Bonnie, “We lost pictures, and so many other things that can’t be replaced. We’re okay, but we don’t have much to move down there now.”

With their retirement plans now on hold, Bonnie sought support and assistance from The Salvation Army.

A Salvation Army mobile feeding unit has been providing assistance near the Port Aransas Ferry, where Bonnie formerly worked. Staff and volunteers have been serving meals, drinks and snacks to residents in need of assistance. “You guys have been there every day when others weren’t," said Bonnie. "You've given us food, supplies, and smiles right when we needed it."

In addition to receiving nutritious hot meals, Bonnie also was happy to accept food for her soul. While standing in line by the feeding unit one day, Salvation Army disaster volunteer Francesco Llanas comforted Bonnie after learning about her story and how she had been affected by the storm. “He asked if he could pray with me and he did. Francesco really made my day,” said Bonnie. Francesco also gave her a bible.

As a token of appreciation to The Salvation Army personnel that served her daily, Bonnie gifted each canteen worker a wristband that read, 'Port A Strong - #Harvey 2017.' “The Salvation Army folks were good to us here in Port Aransas and the wristband is just a little memento for them so they can remember us. We are surely going to remember them for a lifetime,” said Bonnie.

As of September 20, The Salvation Army has served 724,642 meals, 709,375 snacks, and 767,770 drinks statewide in response to Hurricane Harvey. Emotional Spiritual Care Officers have spoken with 42,460 first responders and survivors.