Don't Know What We Are Going to Do, But I'm Glad We Have This Meal 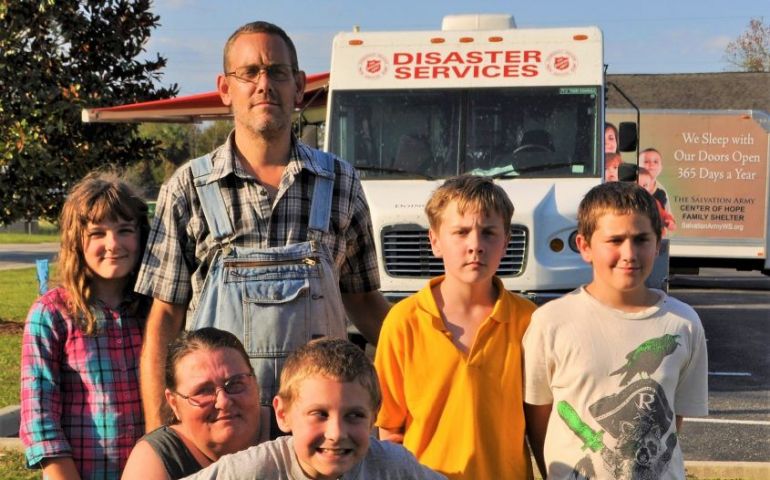 Palatka, FL (September 21, 2017) - The first shooting star Jacob Wills ever saw was on the fifth night the power was out. Hurricane Irma plowed through his town days before, knocking down trees and ripping shingles off roofs. The night was a hot one, but the mosquitos were not out and it felt cooler outdoors.

“Alex and I were outside looking at the stars and I started naming the constellations for him,” said Jacob, a self-taught astronomer. “As I was showing him Scorpio, I saw a shooting star!”

Jacob loves astronomy and enjoys writing political op-eds. He is 13 and lives in public housing in Palatka, Florida with his mom, dad, and three siblings. The lights were out in his community for eight days.

“They forgot about us,” said Jacob’s father, Charles. “We waited and the power trucks never came. I finally rode my bike to town to go tell someone we needed our lights on. Our neighborhood was forgotten.”

Life isn’t easy at the Wills house. Parents Charles and Kathy were in the Navy until Kathy had an ankle injury that put her in a wheelchair. Charles is looking for work right now—he lost his last job when Jacob got sick at school and he had to leave. Kathy home-schools some of their children, teaching them life lessons along with their school work, but in the Wills family, learning happens in and out of school.

“The day after the storm, the kids were in the neighborhood picking up branches—we helped at two churches around the corner and the elderly woman across the street,” said Kathy. “We have taught them that it is their civic duty to help their neighbor.”

The kids love learning. Jacob's sister Anna, 11, wants to be a ballerina. Her family cannot afford dance lessons so she is teaching herself ballet from YouTube videos. Alex, 12, loves video games and wants to be a game programmer. Daniel, 9, has a huge smile and loves collecting leaves.

“We tried being careful and kept the freezer closed,” said Charles. “But food won’t last eight days no matter how careful you are. I cannot afford to replace our food—I don’t know what we are going to do but I am glad we have this meal.”

The Salvation Army helps families like the Wills family after a disaster by providing hot meals and cold water in communities. So many families struggle to buy food the first time—buying it the second time is next to impossible. But things are looking up. Power has been restored in the area. The sun shines and there is little evidence outside left that Irma came through. The community is being connected with services that will help them recover. Little by little life is returning to normal.

“I look on the bright side,” said Kathy. “We planted sunflowers this summer. The day of the hurricane that last one bloomed—the sun was not even out. I see that as a sign from God that the storm is over.”

We can help the Wills family and other families after a disaster through your support. Please donate today. 100% of your donation – every cent of every dollar—goes directly to disaster relief.