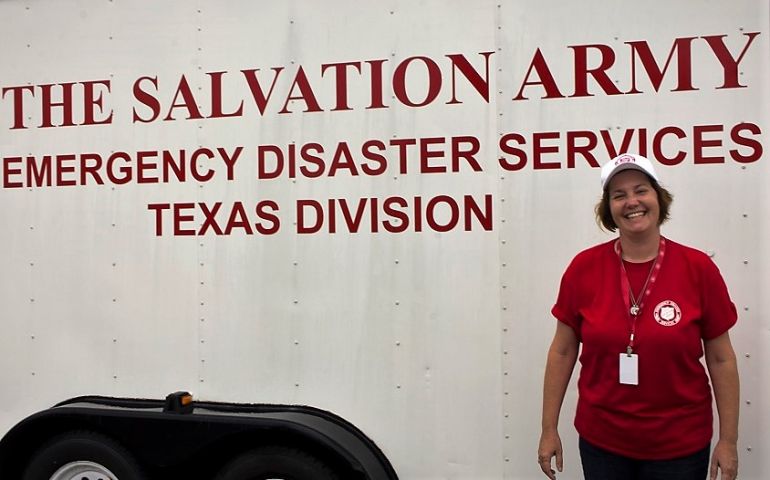 Victoria, Texas (September 24, 2017) – Christy Stankee of Wheatland, Iowa, signed up for an Emergency Disaster Services training course with The Salvation Army almost on a whim. “I saw some information online about a class that was being offered near my home,” she said, “my husband encouraged me to check it out.” That was more than a year ago and Mrs. Stankee never anticipated where that decision would lead her.

After witnessing the news coverage of the devastation caused by Hurricane Harvey, Stankee called her contact at The Salvation Army to express her willingness to help with the relief efforts. Seven years working as a paramedic and EMT gave her an understanding of the importance of timely response in hazardous situations. She was deployed to Victoria, Texas, just days after the storm had passed. Working on a mobile feeding unit, she and her fellow Salvation Army volunteers served three meals a day to people in communities struggling to recover from the effects of the storm.

On the final full day of her two-week deployment to Texas, she encountered an unexpected opportunity to put her skills as a Licensed Nurse Practitioner and Certified EMT to use. On their return to The Salvation Army’s Incident Command that evening, her crew happened upon a car accident where a woman was trapped inside a rolled vehicle. Mrs. Stankee offered her assistance to the Sheriff’s Deputy on the scene without hesitation and was asked to administer life-saving medical care.

Working to stabilize the accident victim until the ambulance arrived, Stankee lived out the service-oriented attitude that had motivated her to volunteer and serve so far from home.

Asked why she decided to leave her family for two weeks and go to a disaster area, she responded, “People needed help. I would want someone to do it for my people.” Stankee’s dedication exemplifies The Salvation Army’s commitment to putting compassion into action. As she returned to Iowa, new teams of trained Salvation Army volunteers from across the country have arrived to continue addressing the ongoing needs of those affected by Hurricane Harvey.

As of September 24, The Salvation Army has served 763,820 meals, 764,391 snacks, and 805,165 drinks statewide in response to Hurricane Harvey. Emotional Spiritual Care Officers have spoken with 46,265 first responders and survivors.