This Is My Storm: A Hurricane Harvey Survivor Story 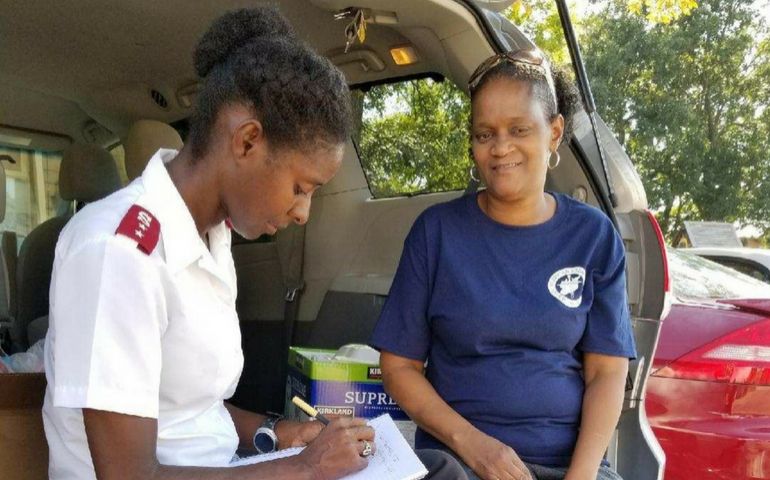 Houston, TX - Since before Hurricane Harvey made landfall, The Salvation Army of Greater Houston was making preparations to assist those who would inevitably be impacted.  All four of our homeless shelters were opened to evacuees; turning no one away. Stockpiles of water, snacks and meal preparation supplies were collected and ready for distribution.

On August 25th, Hurricane Harvey made landfall in Texas as a category four hurricane with 130 miles per hour winds. From August 26-30, Harvey covered 70% of Harris County with 1.5 feet of water, affecting an estimated 136,000 structures.

Today, after much of the immediate need has been met, some mobile feeding units and ESC teams continue to provide food and water daily in the hardest hit areas while the Incident Command team finalizes short and long-term recovery plans.  The stories of survival, loss, resolve, and hope are never-ending.  Once such story recently came from the Greenspoint area of Houston.

While providing food and supplies to an apartment complex, the ESC team met a precious lady named Rosalinda. She spoke with halted speech as she introduced herself. While getting to know her, she shared that she had suffered a stroke and heart attack two weeks prior and that her heart now functions at only 14%. She held a large folder filled with her discharge papers from the hospital. As the team loaded supplies and food into her vehicle, she shared her inspiring testimony.  The team was moved to tears as they listened to Rosalinda testify of God’s goodness throughout her struggles. “I believe that God writes your life. I don’t let anything get me down.  God allows you to go through storms to make you strong.  This is my storm, but this is also my season.”

The road to recovery here in the Greater Houston Area will be long and challenging.  Thanks to the generosity of those around the country, our dedicated officers, employees and trained disaster volunteers, The Salvation Army has been helping the survivors of this devastating weather event. And we’ll be there until the healing is complete.