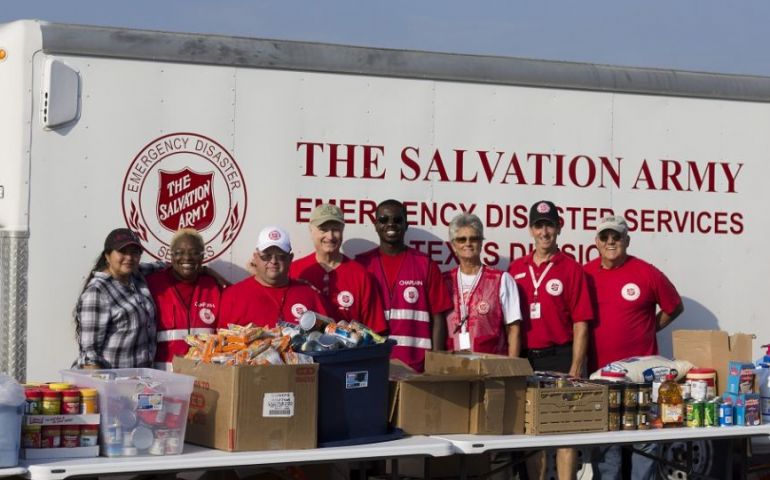 “Our actual city hall is one hundred percent unusable due to storm damage,” explained Mayor Mary Canales. “The community center here has really become a place of refuge.” As local residents arrived to pick up canned food and supplies from The Salvation Army, Mayor Canales greeted each one by name. “We’re really like a big extended family,” she said. Her eyes filled as she described the way neighbors have supported one another in the aftermath of Harvey. “This community is full of really wonderful, kind people.”

Mayor Canales' emotions swelled as she explained how the cleanup process has been difficult especially for elderly residents. “A lot of homes were badly damaged. We’ve got mold problems… just lots of repairs needed,” she said. As tears began to fall, she and Salvation Army volunteer Dee Smith shared an embrace. “We’re just so grateful for The Salvation Army being here,” said Mayor Canales.

Miss Smith—known to many as “Disaster Dee”—has worked with The Salvation Army’s Emergency Disaster Services for almost 40 years. From Kansas City, she is currently serving as The Salvation Army’s Liaison Officer in Victoria. “Jesus said ‘it’s more blessed to give than to receive,’” she commented. “It’s so rewarding for me to help others.” From offering much needed cleaning supplies to supplying well-timed hugs, The Salvation Army will continue to meet human needs in Jesus’ name for the long road ahead after Harvey.

As of September 30, The Salvation Army has served 862,578 meals, 898,295 snacks, and 925,455 drinks statewide in response to Hurricane Harvey. Emotional Spiritual Care Officers have ministered to 51,724 first responders and survivors.