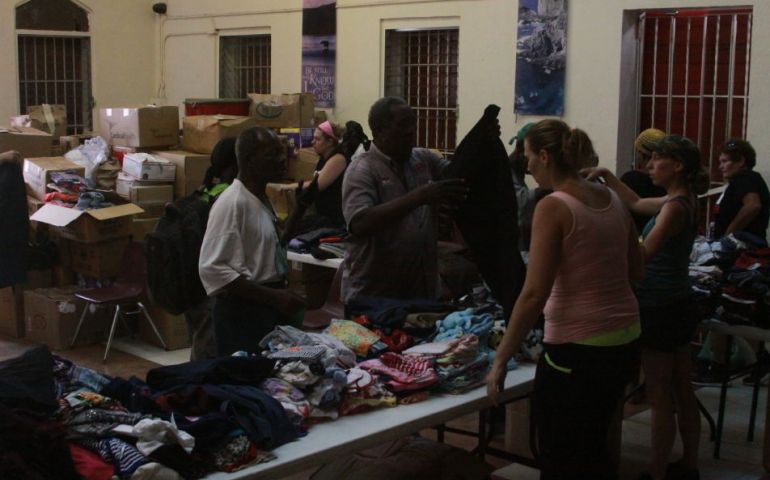 ST. THOMAS, USVI - Early Wednesday morning, nine dedicated Salvation Army volunteers joined staff at The Salvation Army in St. Thomas to begin its recovery process. Half of the volunteers worked handing out free clothing to the homeless and the very low income in need of items to replace the clothing they lost as a result of damage from Hurricane Maria.  More than 2,000 items of men’s, women’s, children’s and infant’s clothing were distributed from The Salvation Army Chapel.

The other half of the volunteers donned gloves and masks and removed debris and other destroyed items from within the offices, classrooms and other areas at The Salvation Army’s site. The heavy debris included much of the building materials that were torn off the roofs of Salvation Army buildings. Additionally, spoiled foods that remained in refrigerators and freezers, paper materials, formerly donated clothing and shoes that had been exposed to rain, mudslides, and other contaminants during the storm, were packaged and properly disposed of.

“The work was physically demanding and in some cases, dangerous,” stated Marianne Brown. “The building materials, for instance, contained sharp edges, rusty nails and were very heavy. The spoiled foods and the bulk of the disposed clothing were soaked due to exposure to the elements so these items were also very heavy. Despite all of this, dedicated volunteers participated and they did so with smiles on their faces and love in their hearts. I can’t express how grateful I am to those individuals who immediately said ‘yes’ when I called to ask for help!”