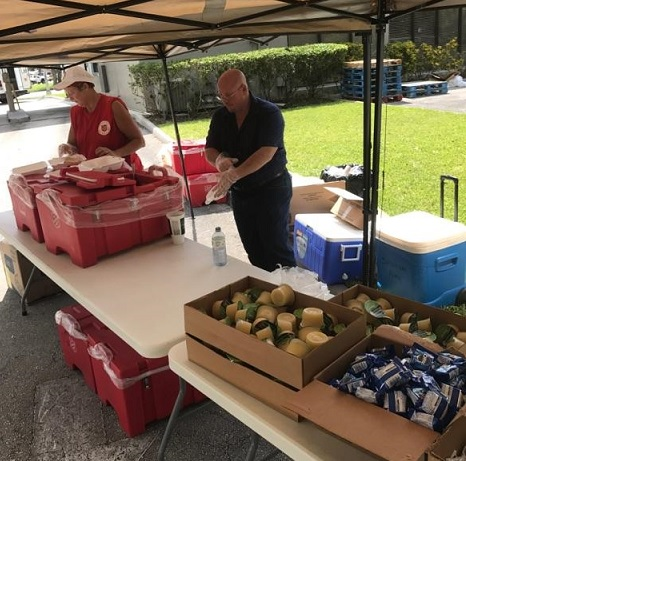 Bonita Springs, FL (October 1, 2017) – Every day for an almost a week, cars were backed up on US Hwy 80, waiting patiently to get through a local bank parking lot to receive food, water and snacks provided by a Salvation Army canteen.  Debra Wilcoxson and Sue Duquette, Salvation Army volunteers from Venice, FL. describes cars waiting at least 40 minutes to get through.  Other volunteers described it as a despairing site to see so many people waiting to get bottled water due to grocery stores having little to no water left on the shelves.  Volunteers were quickly becoming physically drained by the heat of the day, while continuing to serve people with a smile and a prayer.  Wilcoxson says the team was exhausted until a truck showed up from the Hendry County Jail.

Sheriff Steve with Deputy Bobby and three inmates from the Hendry County Jail showed up just in time to rescue The Salvation Army in the heat of the day.  Within minutes, Sheriff Steve directed traffic with efficiency, while greeted his fellow neighbors with a handshake and a smile.  Deputy Bobby and Inmates set up tents, tables and unloaded two 28ft trucks of supplies to easily distribute 1,600 meals to the people driving in and out.  Debra described the atmosphere changing from hopeless to hopeful from all the volunteers and all those being served.   She saw people with tears in their eyes and thankful smiles of appreciation.  Sheriff Steve suggested the disaster team move to Barron Park for more parking and a pavilion to set up the distribution.  Once they moved to the park, Sheriff Steve continued to bring out inmates from the Hendry County Jail for an additional two days to help serve people with The Salvation Army.

“We were so grateful for Sheriff Steve,” said Sue Duquette.  “The inmates were so helpful and thankful to have the opportunity to help serve the community.”

Volunteers are serving side by side with other organizations in the community to fill the needs of people throughout Bonita Springs.  The Salvation Army is seeing the community work together to bring back normalcy in their lives.  It has become an emotional time for people as recovery efforts begins.