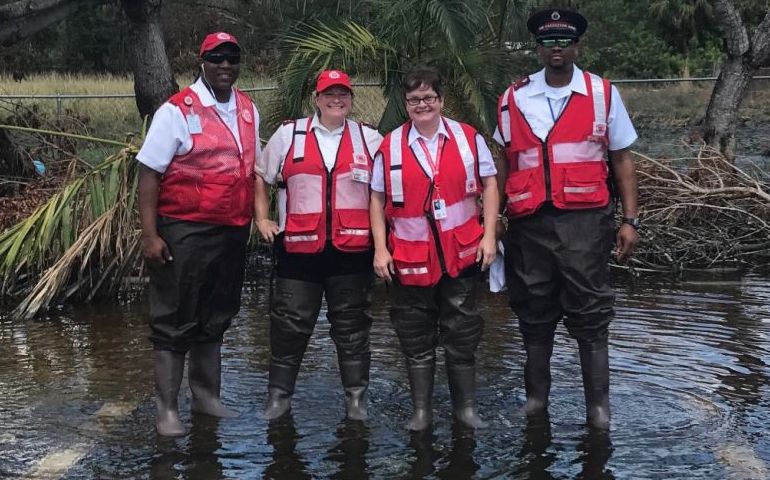 Fort Myers, FL – As standing contaminated water and undesirable smells still linger in hardest hit areas around Fort Myers, Salvation Army Officers and workers continue to tirelessly tread through waters to reach people (door to door) handing out food, water, and offering emotional and spiritual care to so many citizens overwhelmed about the amount of personal loss.

Salvation Army Officer, Major Amy Lee, serving on the Emotional and Spiritual Care team reported that since last Monday, neighborhoods across from the Home Depot in Bonita Springs couldn't even drive down the street because it was flooded.  She said the teams went door to door, wearing hip waders to get up to most people's front porch because there was still so much standing, contaminated water and that the folks they talked to there had mixed responses - almost everyone had to haul away all their belongings as well as rip out the sheet rock in their homes and drag it to the curb - this was hard work and heartbreaking.  Yet there were still those residents that spoke of hope that somehow, they would make it through although weather reports of rain did concern them and many were happy to receive extra tarps for their homes.

Another team went into the Imperial Springs mobile home park in Bonita Springs, going door to door offering tarps to the houses that had obvious roof damage and delivering water and snack packs to those in need.   The team encountered a 90-year-old woman who had her roof completely blown off and her grandchildren came to salvage what they could from inside, but they said the house will have to be torn down. They said it broke their hearts to have to tell their grandma on her 90th birthday that because of Irma, she would never move back into her home.

The teams value their one on one ministry as priceless to what they receive in return from the people they touch.  Salvation Army Officers are called to reach the people where they are and to provide a ministry of love to all.   Teams will continue to walk the neighborhoods of Bonita Springs for the next week assisting people with food, water, snacks, and spiritual care.  As of today, October 1, The Salvation Army in Ft. Myers have prepared and distributed 40,178 meals, given out 113,491 drinks and snacks, provided 6,321 cleaning kits, 1,564 food boxes, 120,266 infant supply boxes, and offered spiritual care to 1,990 people.