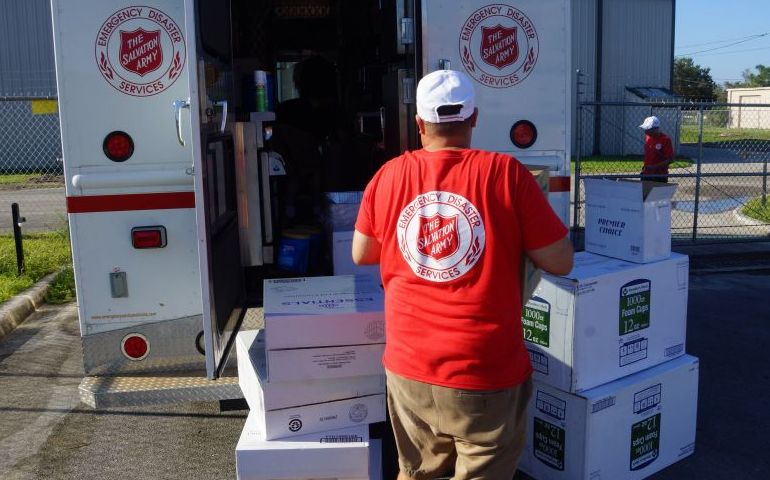 Jackson, MS – As tropical depression 16 strengthened into Tropical Storm Nate Thursday, The Salvation Army of Alabama, Louisiana, and Mississippi is placing all units within the three-state division on standby. Officials have also recalled equipment and personnel from disaster assignments in other states as Nate is forecast to make landfall Sunday.

“Our officers, staff, volunteers, and equipment have served residents in other areas with live and kindness in their time of need,” said Terry Lightheart, Emergency/Disaster Services Director for The Salvation Army of Alabama, Louisiana, and Mississippi. “Now with Nate, we need them.

Nate is the third storm to impact the Southeast in the last two months following Harvey and Irma. Local Salvation Army Commands and Corps are prepping for response should the need arise by contacting local and county emergency officials and stocking mobile feeding units or canteens with meals, water, and snacks.

“We are ready for whatever Nate may bring,” said Major Gary Sturdivant, Mississippi Gulf Coast Command. “I spoke with local officials, and they know we are ready to serve food and drinks, plus provide emotional and spiritual care to those who may be affected.”

Even with several officers, staff and volunteers having previously served in Texas and Florida, teams and equipment are ready to move in once the storm moves through.

“As a precaution, we are moving our equipment to higher ground, so we are prepared if needed,” said Major Ernest Hull, New Orleans command. “The last few weeks were extremely busy, but our job is serve where we are needed the most. If there is damage or flooding, The Salvation Army will be there to help.”

Please designate “Hurricane 2017” on all checks.