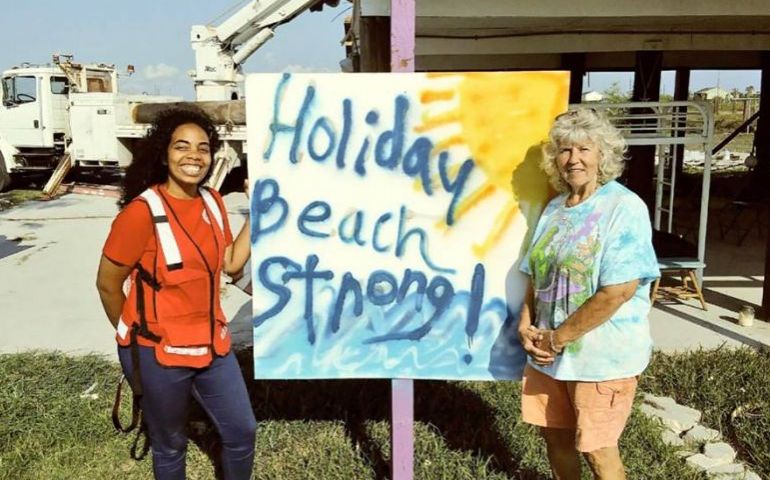 “I wanted the signs to remind people that despite the devastation, the community will come together, remain hopeful, and rebuild,” said Analisa Kennedy, potter and photographer. “We are static but we are still here.”

Analisa and her husband celebrated their 44th wedding anniversary in their Holiday Beach house only a week before Hurricane Harvey devastated Texas. When Analisa returned to her neighborhood, after evacuating for several days, she found merely a skeleton of her home still standing. The storm had stripped away the roof and walls of the house and their belongings lay broken, soaked, and ruined on the ground. One item that remained intact in the rubble was the families leather bound bible.

The Salvation Army has been comforting Holiday Beach residents by providing prepared meals, hydration, and emotional and spiritual care each day.

“The Salvation Army has been a God send! In addition to bringing much needed food, they’ve been making us laugh and there’s not a lot of laughter around here anymore,” said Analisa. “And you have to have humor because if you don’t, you’ll cry a lot.”

“I cannot tell you how much those meals meant to our community,” said Analisa.

As a token of her appreciation for the assistance that she received following Hurricane Harvey, Analisa intends to volunteer her time as a bell ringer this holiday season. She is excited to support The Salvation Army’s initiatives to serve other people in need.

“Salvation Army workers from all over the country were there for us and we want to be there for them.”