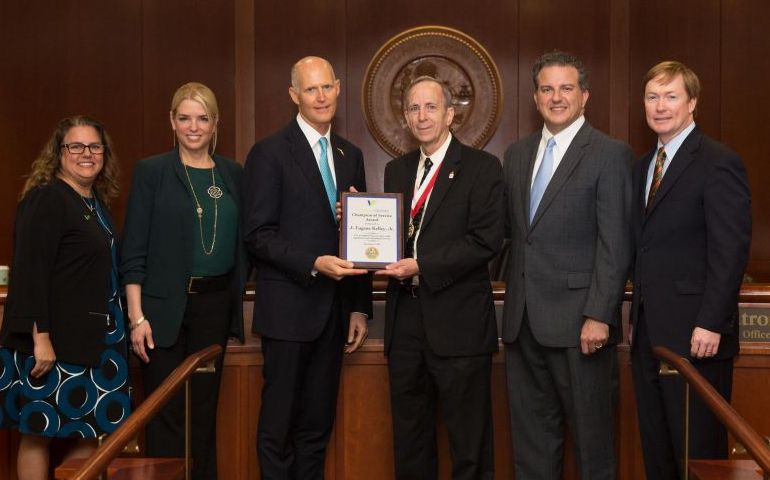 TALLAHASSEE, Fla.-The Salvation Army’s Emergency Disaster Services team is honored to recognize volunteers, Gene Kelley and Steve Rocca,  who have both been awarded the Governor Scott and Volunteer Florida’s Champion of Service Award.   The Champion of Service Award was established in 2013 by Volunteer Florida to honor individuals and groups for their outstanding efforts in volunteerism and service.

Gene Kelley, volunteer with the Tallahassee Corps since 1985, deployed to Texas following Hurricane Harvey and upon return, stepped up to serve his own community for Hurricane Irma.  According to his Corps Officer, Lt. Ryan Meo, “Gene is the heart and soul of what The Salvation Army embodies- servant leadership and a willingness to think outside the box to help meet community needs.”

Volunteer with the Orlando Area Command, Steve Rocca, was also presented with the Champion of Service award in October.  Following the Pulse shooting tragedy, Steve, who was the Advisory Board Chair at the time, discovered his passion for serving on a canteen.   “Deployed to both Houston during Hurricane Harvey and multiple locations in Florida during Hurricane Irma, we can always count on Steve to tell the story of the good work of The Salvation Army”  states Major Ted Morris, Orlando Area Commander.

Awards were presented during a meeting at the Florida Cabinet by Governor Rick Scott and Volunteer Florida Chief Executive Officer Vivian Myrtetus.