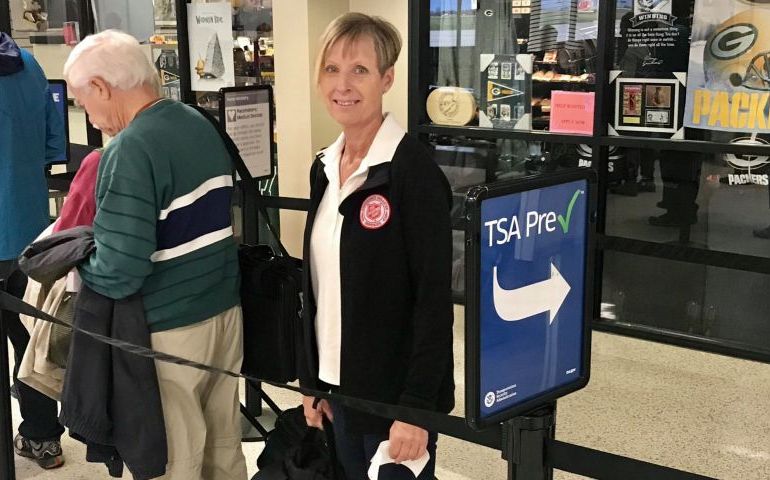 It has been more than two months since Hurricane Maria plowed through Puerto Rico.

The Category 5 hurricane, which left 66 dead, cut off electricity to nearly all of the island’s 3.4 million residents, destroyed 80 percent of the agricultural supply, knocked out cellular phone service, blocked roads, decimated homes and left at least 1.7 million people without potable water, according to The New York Times.

NBC News says that while the electrical system has been partially resuscitated, helped by mega-generators imported by the Army Corps of Engineers, less than half of Puerto Rico currently has power.

The following is an interview with Terri Leece, the Disaster Director for The Salvation Army's Wisconsin and Upper Michigan Division, on her experience of being deployed to the island. Leece was in Puerto Rico from October 28 to November 16.

How did you find out you would be deployed Puerto Rico?

I submitted my paperwork to The Salvation Army's Territorial Headquarters (THQ) in Chicago. THQ then contacted me to say I was approved to deploy.

How long was your deployment?

Initially, it was for 2 weeks. I offered to stay an additional week to cover until the next person could relieve me.

What was the condition of the island?

It varied. Some parts were OK, some parts had minor damage - leaves were torn off the trees by the wind, smaller trees were broken off. Parts of the Island sustained major damage - homes were badly damaged or destroyed, major flooding due to all the rain. Trees were completely uprooted, roads were completely washed out making travel very difficult.

What were your first thoughts?

At first, the damage didn't seem that bad in the area where we were staying at. It wasn't until you actually drove around that you noticed there were no working street lights, no working stop and go lights, many homes and businesses without power. The ones that had power were using a generator.

What was the biggest challenge while you were in Puerto Rico?

Getting up in the mountains where people needed assistance. Roads were completely washed out or in poor condition. We had to park the box truck with food boxes and transfer them into vans to deliver them. We would park the van on the road and go door to door with the food boxes.

Can you share your most memorable moment during your deployment?

We were out delivering food boxes and an elderly gentleman let us use his drive way to park in. We ended up staying there for about an hour while we regrouped. I spent most of the time talking to the elderly man even though he only spoke a little English and I didn't speak any Spanish. He showed me plants he was growing. He gave me a tour of his home that had some water damage and no electricity. He opened his refrigerator to show me that it was almost empty.  He also showed me all the medication he was on and so we gave him a case of bottled water to take his medication with. But what I remembered most was his positive attitude. He was fine living without the usually comforts we take for granted. He was more concerned about his neighbors getting help. He used to write songs when he was younger and he sang a couple of them for us. He had a beautiful voice. He told me he was going to write a song about the hurricane.

We would start with a 7:30 a.m. meeting with everyone to go over the plan for the day before everyone headed out for the day. Most of them were involved in delivering the food boxes. I would then drive into San Juan to go to the Divisional Headquarters and meet with some of their staff to help them put a plan together for when the operation transitioned over to them. I would stop at FEMA's Joint Field Office to see how the 2 liaisons were doing and if they needed anything. I would go back to Caugus and work with the Finance & Administration person on daily reports, stats and approved everyone's reimbursements for supplies, meals, etc. Sometimes I would go and get supplies. We would have another meeting with the staff at 7:30 p.m. to discuss how the day went and make sure we were set for the next day.  We didn't have reliable internet where we were so we would have to go to Wendy's, which was about one mile away, in order to access their Internet to send reports and receive our Lotus Notes.

How many other Salvation Army workers were you with?

Would you do it again?

Yes. It was a great experience.

It was a very rewarding experience. People were so grateful that we were there to help them. We had a great team that never complained about the long days we put in. Our area was also without power. Fortunately, FEMA provided us a generator that powered the facility that we worked out of and stayed in. The generator ran out of fuel one night which was a great reminder to all of us about how blessed we were to have a generator. It really hit home of what many of the survivors were dealing with on a daily basis. We take so much for granted.