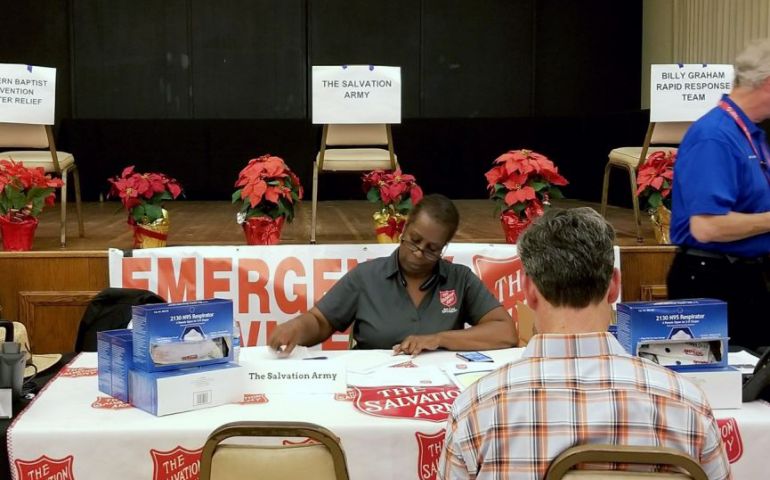 Los Angeles, CA, December 21, 2017– Residents of Ventura and surrounding cities continue to try and rebuild, while the Thomas Fire continues to burn. A Local Assistance Center (LAC) set up at Poinsettia Pavilion (3451 Foothill Road, Ventura, CA 93003) has been the primary site of disaster recovery assistance, where over twenty groups and agencies, including The Salvation Army, are speaking with victims and survivors and assessing their needs.

The Salvation Army in particular has been a major presence at the LAC. Since last Wednesday, December 13, staffers from The Salvation Army have spoken to and given assistance to over 312 households; this aid has a combined financial value of more than $88,550. The Salvation Army’s Ventura Corps headquarters (650 S Petit Avenue, Ventura, CA 93004) is currently serving as a distribution center where visitors can pick up supplies such as canned goods, cleaning products, and hygiene products.

Previously, in the immediate aftermath of the Thomas Fire, The Salvation Army staffed two major evacuation shelters and distributed over 5,000 meals in total. As the need for shelters reduced, The Salvation Army transitioned out of them and began the work of recovery with residents. This included a large distribution center at the Santa Paula Community Center, which gave out approximately 1,595 items of clothing, 274 cases of water and more, before closing on December 17. The Salvation Army Ventura Corps board members, with the support of the Rotary Club, also provided hundreds of meals to National Guard troops.

The Salvation Army is asking the public for financial donations, which can be used to meet immediate challenges and specific needs. To donate, go to socal.salvationarmy.org or call 1-800-SAL-ARMY and donate to fire relief today.