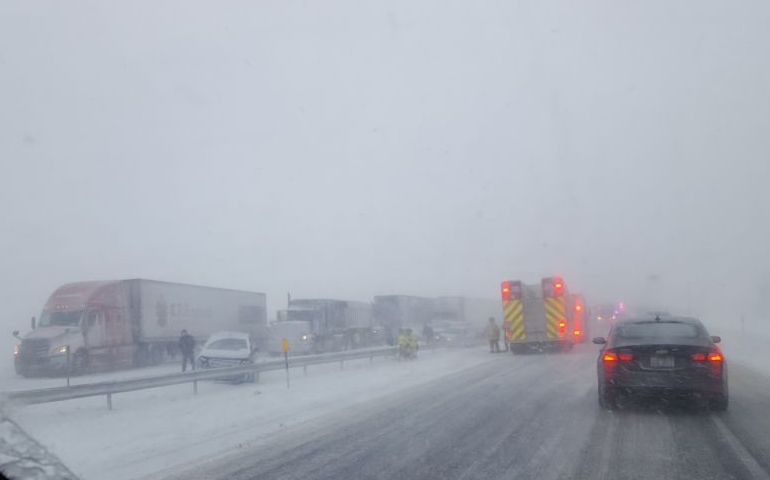 Buffalo, NY - The Salvation Army Emergency Disaster Services Teams based in Buffalo, NY (Erie County) responded to a 75 vehicle accident on the New York State Thruway Tuesday afternoon. The teams provided canteen and hydration services to approximately 75 first responders who were involved in extracating, treating and transporting over 100 travelers involved in the mile long accident that occurred during a blizzard warning caused by heavy lake effect snow and 45 mph plus winds.  The Salvation Army also assisted in providing hot drinks, water, snacks, blankets and emotional and spiritual care to 100 survivors of the accident who were stranded on the Thruway for nearly four hours before they could safely be rescued and transported to a warming shelter at an area hotel.

“Our Buffalo Area EDS Team has continued to build on the momentum they gained during 2017.  This team of highly qualified and dedicated volunteers continues to serve when ever and where ever they are requested.  It is a proud and humbling experience to hear our local first responders request our assistance by name over the radio and then see the thanks and relief in the eyes of those involved when we arrive on scene.  Whether it is a cup of coffee for a cold and tired firefighter or EMT, a blanket for a traveler caught up in a white out leading to an accident or simply a comforting word, our EDS Team is there, never searching out the limelight, just to be a helping hand in a time of crisis.” said Michael R. Schwartz, Divisional Disaster Director for the Empire State Division of The Salvation Army.