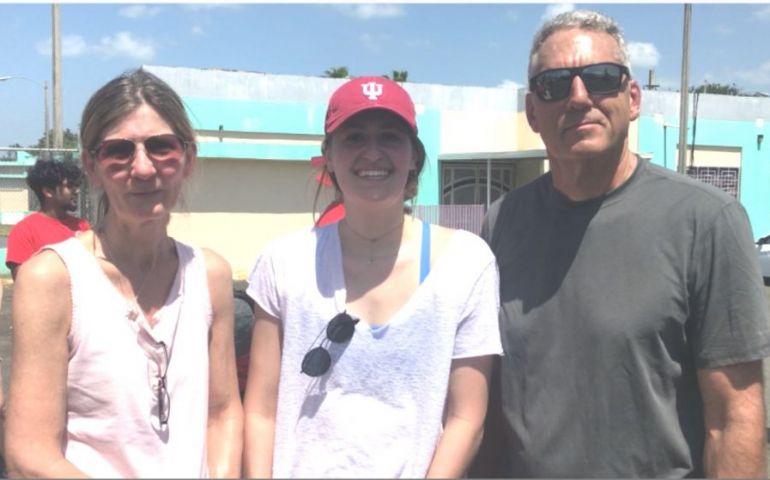 Toa Baja, Puerto Rico - For most families, going on vacation is a chance to get away from the grind of everyday life and relax. The Nitzbergs, a family of three from Los Angeles, California, sought out an opportunity to make a difference. Their strong desire to volunteer in a meaningful way led them to choose mission work in Puerto Rico, serving those in need through various non-profits, including The Salvation Army. “[The distribution of essential items] seems like it’s really helping a lot of people,” said Marianne Ryan, the family’s mother. “People who came through the line were very, very grateful.” The family served for several days with The Salvation Army.

On one such day, in Toa Baja, Puerto Rico, the family helped to serve approximately 300 people, distributing essential items including food and water. One served survivor, Joemil Robles Logo, of Calle Paz Palcela Lllo, shared that he had only just received power back for the first time since Hurricane Irma, living 6 months without power. “It’s very hard,” Logo said. “Everything went bad, everything just broke down.” Getting supplies from The Salvation Army on this day was critical for Logo’s survival and emotional spirit. “Thank you very much for all the things you’ve done for us,” Robles Logo said of The Salvation Army and its volunteers. “You guys will be in our hearts forever.”

As the day began to wrap up, Kate Nitzberg (the family’s daughter) was asked what she thought about her experience volunteering with The Salvation Army. “One guy came over at the end and waited to shake my hand and said, “Thank you for doing what you’re doing,’” Nitzberg said. “It’s really awesome, and it’s really cool to do.” The family’s father, Alan Nitzberg, helped carry boxes of food and water to cars for those who couldn’t carry the heavy items themselves. “I chatted with people along the way who were very appreciative. It’s nice to know that when you donate money to The Salvation Army, it ends up at a place like this.” The Salvation Army has continually served hurricane survivors for over the last six months, and will continue to serve until the need is met.