Hope For A Fragile Life 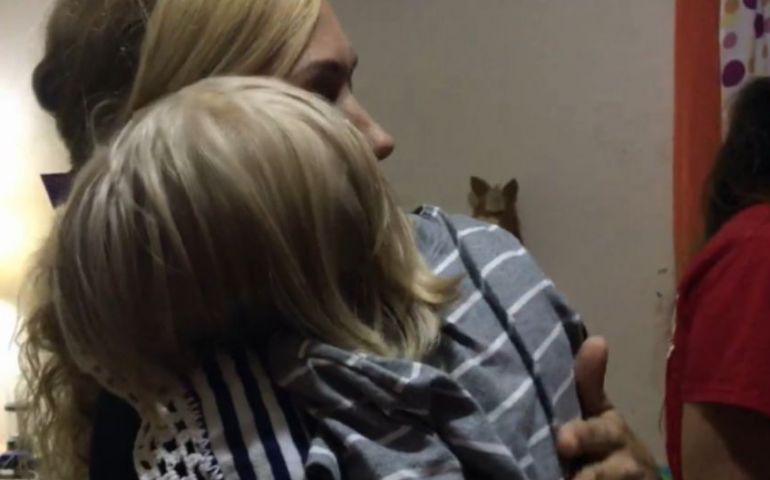 Moca, Puerto Rico - The drive was long and treacherous, with slender winding roads, downed power lines and debris encroaching from all sides. But that didn’t matter. The Salvation Army Emergency Disaster Services team had been anxiously waiting for over a week to deliver a lifesaving generator to a family in Moca, located in northwest Puerto Rico. A generator had been denied by other organizations who couldn’t put the child’s multiple health issues into a specific category. Yadiel, who is nine years old is the size of a toddler with severe labored breathing and no ability to speak. He has a multitude of health issues he’s been suffering with since birth. The family had been without power for approximately six months following Hurricane Irma and Maria. Recently, power returned but has been very sporadic, making survival difficult for this fragile life.

As The Salvation Army pulled up to the mountain top home, Nicky Roy, Incident Commander for The Salvation Army’s emergency disaster response, embraced the boy’s aunt who had led the team up the mountain to the family’s front door. “Thank you so much for driving us here,” Roy said. The drive had been a difficult one. “Thanks for all you are doing. It’s very important for the family,” the aunt replied. “Nicky, you’re an angel.” The Salvation Army wanted to deliver the generator for over a week. However, Yadiel had been in the hospital for an undetermined length of time and poor phone service made communication difficult.

Led by the boy’s aunt, one by one The Salvation Army team unloaded the van and cautiously walked down the steep steps bringing supplies. Boxes of food to feed the family for a month, water, batteries, personal hygiene products, bed sheets, a solar radio, a propane stove with tanks, a $250 gift card for fuel and necessities and most importantly, the much-needed generator were provided.

As the team entered the home, they were greeted by the father who welcomed everyone with a smile and a handshake. The boy’s older brother was sitting on the couch, his hand on his chin and his eyes lowered, perhaps nervous of strangers entering his home. As the boxes piled up in the living room, Laura Krueger, The Salvation Army’s Public Information Officer spoke to him, “It looks like we’ve made a mess of your home.” “It’s not a mess,” the brother said, “It’s beautiful.”

Generators are scarce on the island. Roy explains as Rey Ruiz, the Salvation Army’s Warehouse Manager interprets, “We went through many applications at six or seven places looking for people to help.” There are many on the island with severe medical issues in need of generators for survival and not enough to go around.

The team was led down the hall, around a corner and into a darkened room where the boy’s mother was cradling him. The mother caressed his shoulder and brushed her fingers through his bright blond hair. He is having trouble breathing, taking short shallow breaths. Mom takes close care of him 24 hours a day, with little rest. She adjusts his little arm from behind her. “It’s a miracle from God that he’s alive,” Roy says as she crouches near the boy and his mom. “You are his parents and have taken such good care of him every day, and loved him.”

When his mother was asked how she is doing, she wiped a tear from her eye, held her son close and said, “I feel blessed.” She prays for him every day. In tears, Kathy Dyer, a Salvation Army volunteer from Connecticut, prayed for strength for the family.