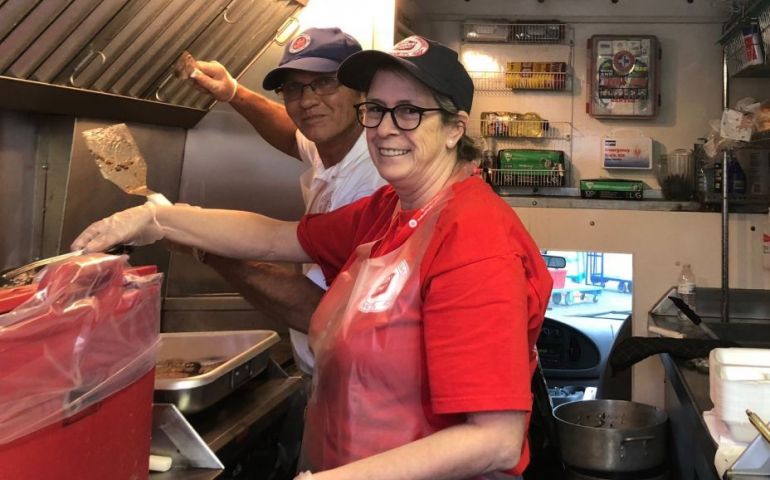 Greensboro, N.C. (April 17, 2018) - On Sunday, April 15 a line of severe storms moved rapidly through North and South Carolina, knocking down trees, dropping large hail, and causing power outages to more than 75,000 customers. The National Weather Service confirmed that a tornado with 135 mph winds touched down in several places in Greensboro, North Carolina.  According to the Greensboro city manager, 20 homes and businesses were destroyed, 80 homes and businesses have been reported with major damage, and another 60 had minor damage. The storms affected a total of 320 structures in Greensboro.

The Salvation Army of Greensboro deployed a mobile feeding unit to one of the hardest hit areas to serve relief workers and families who are searching for personal belongings and clearing property of debris from the storm.  At lunch Monday, 300 meals were served and the numbers were expected to rise for dinner. The Salvation Army is also onsite to provide emotional and spiritual care to survivors and first responders.

“We are here to meet the needs of the community, whether that need is a meal, a shoulder to lean on, or groceries, clothing, and household items for people impacted by the storms,” said Major Don Vick of the Greensboro Salvation Army. “It’s heartbreaking to see the devastation of the families, but we are honored to be here to offer hope and a hot meal.”


About The Salvation Army
The Salvation Army annually helps more than 23 million Americans overcome poverty, addiction, and economic hardships through a range of social services. By providing food for the hungry, emergency relief for disaster survivors, rehabilitation for those suffering from drug and alcohol abuse, and clothing and shelter for people in need, The Salvation Army is doing the most good at 7,600 centers of operation around the country. In the first-ever listing of “America’s Favorite Charities” by The Chronicle of Philanthropy, The Salvation Army ranked as the country’s largest privately funded, direct-service nonprofit. For more information, visit www.SalvationArmyUSA.org. Follow us on Twitter @SalvationArmyUS and #DoingTheMostGood.