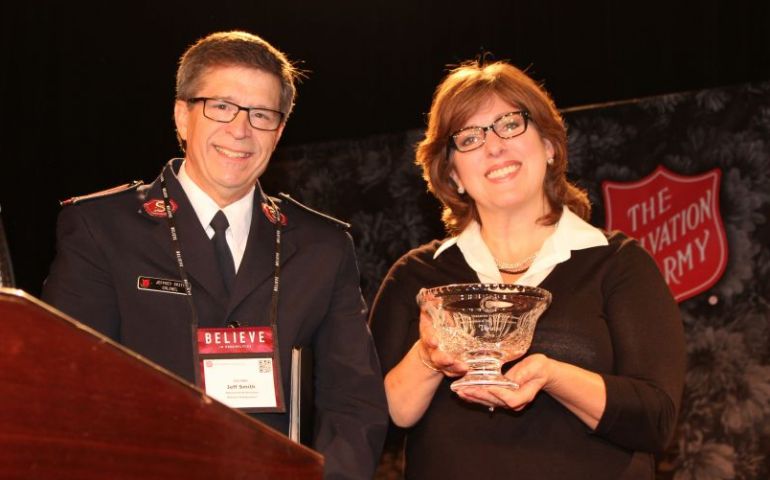 ALEXANDRIA, Va. (May 2, 2018) – Verizon has received the “Sleeves Rolled Up” National Partnership Award from The Salvation Army for working on the ground and providing immediate and long-term recovery needs in support of the 2017 hurricane season, which was the costliest in American history.

“We recognize Verizon as an essential partner during the 2017 hurricane season,” said Lt. Colonel Ward Matthews, The Salvation Army National Community Relations and Development Secretary. “The value of communications for disaster responders and survivors is beyond measure, and so is Verizon’s dedicated and generous support as a partner.”

Verizon has been committed to working alongside disaster relief partners to return a sense of normalcy to survivors and restore impacted areas. The Salvation Army recognizes Verizon’s long track record of helping the communities it serves both during and after disasters.

In addition to a generous financial gift of $2.5 million to The Salvation Army’s 2017 hurricane response efforts, Verizon has worked closely with The Salvation Army to support much needed communications, providing complimentary smartphones with activated hotspots and unlimited domestic talk, text and data, jetpacks, Mophie Packs and wireless charging bases.

“Verizon is proud to join our friends at The Salvation Army in supporting our communities when they need us the most - during extreme weather events and other emergencies – with the most reliable network in the country,” said Nicola Palmer, Chief Network Engineer and Head of Wireless Networks at Verizon. “We know that reliable communication is never more important than in times of crises and natural disasters. Our networks are designed from the ground up with reliability in mind. When a crisis hits, we are there for individuals, businesses, first responders and everyone who needs to stay connected when it matters most."

In addition to monetary donations to non-profit organizations, Verizon offered the following support for the 2017 hurricane relief efforts: