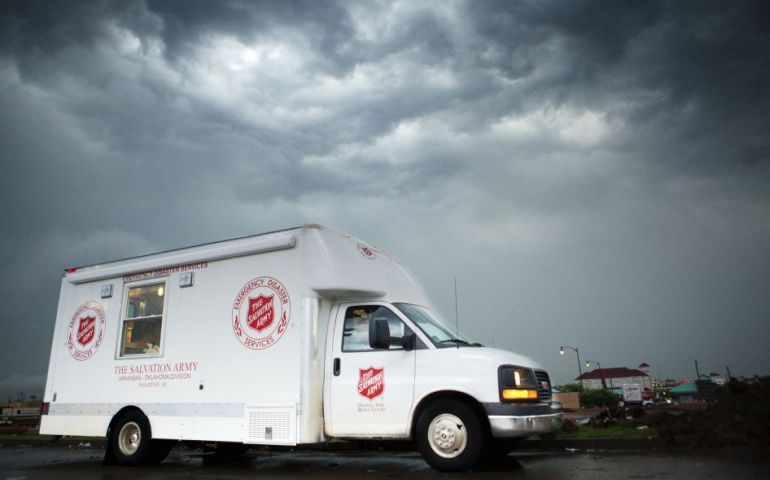 With response and recovery efforts complete, Oklahomans can now focus on being prepared for future storms

MOORE, Okla. (May 15, 2018) – The Salvation Army continues to be a source of hope, stability and service to Oklahoma residents five years after spring storms ravaged the state. For three days in 2013 – May 19, 20 and 31 – an onslaught of powerful tornadoes brought loss of life, property and basic needs. Today, The Salvation Army is a leading partner in helping rebuild and restore the communities and prepare Tornado Alley residents and response teams for future outbreaks.

The tornadoes, reaching up to two and half miles wide, set records for devastation in impacted areas of Oklahoma City, Moore, Carney, Shawnee, and El Reno. Forty-nine people died, and more than $2 billion in damages were reported.

As an existing community member and partner – The Salvation Army has a presence in every ZIP code in America – the organization was uniquely prepared to respond immediately when the tornadoes struck. With the deployment of local and regional trained Salvation Army Emergency Disaster Services staff and volunteers, survivors and first responders received food, hydration, emergency supplies, and emotional and spiritual care. Immediately after the outbreak, The Salvation Army provided:

Service delivery was supported by the deployment of 28 mobile feeding kitchens and the opening of a 100,000-square-foot distribution center.

“We were prepared to respond to the unprecedented events thanks to an innate knowledge of the community and trained disaster personnel,” said Major Ben Lawrence of The Salvation Army. “It was a challenging time for the community, but also one of hope, resilience and togetherness.”

You can watch stories of The Salvation Army’s impact here.

Thanks to a historic $23 million donated to The Salvation Army to meet the short and long-term needs of impacted communities, The Salvation Army has helped residents rebuild and replace homes, replaced vehicles and transportation, provided furnishings and household goods, offered utility assistance, met medical needs such as providing eyeglasses, supplied gift cards to meet daily needs, and provided Christmas assistance.

The exceptional generosity of the public enabled The Salvation Army to provide more than $13.3 million in direct services to survivors of the three tornadoes for both emergency and long-term recovery needs. Remaining disaster funds have been and will continue to be used for:

“The Salvation Army has been part of this community for more than 100 years, and we’ll continue to respond and rebuild when disaster strikes – no matter how big or small,” said Major Lawrence. “We may not know what lies ahead, but we’re prepared to serve.”