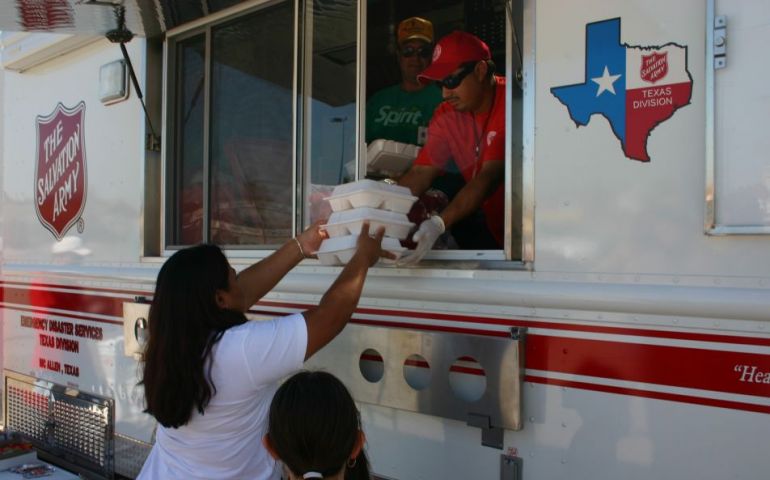 San Marcos, Texas (July 23, 2018) – Following a deadly apartment fire in San Marcos, Texas, that began on Friday morning, The Salvation Army has been providing meals and emotional and spiritual care throughout the weekend.

The Salvation Army Service Center in San Marcos responded to a request for assistance and a mobile kitchen was deployed from The Salvation Army in neighboring New Braunfels. Lunch and dinner was served to around 250 survivors and first responders on Friday and Saturday.

“At least one of the apartment complexes affected by the fire served as student housing for the summer session of Texas State University here in San Marcos,” said Kathy McNeil, Director of The Salvation Army Service Center in San Marcos. “Tragically, we have learned that four individuals died in the fire and several others were seriously injured. The Salvation Army has arranged for hotel rooms for the families involved. These families desperately need our prayers.”

Mike Jones, Emergency Preparedness Coordinator for Hays County, was responsible to deliver the tragic news to the families about their missing children. Jones, a Salvation Army Board Member in San Marcos, specifically requested that Kathy McNeil be present and available to pray with these families.

Close to 200 people have been displaced because of the apartment fire. Local Salvation Army staff, volunteers and Advisory Board members will continue to serve as part of the City of San Marcos Fire Assistance Center on Tuesday and Wednesday. The Salvation Army will provide emergency assistance in the form of gift cards to affected individuals and families.

This ongoing emergency response effort is an example of the continued successful collaboration between the Service Extension program in Texas, local Corps and the Emergency Disaster Services team. All Texas Service Extension Representatives, and many of the Service Center staff and Unit volunteers are certified Salvation Army disaster volunteers, including the Ministry of Presence.

For more information on Salvation Army EDS efforts or to make a donation please go to www.disaster.salvationarmyusa.org