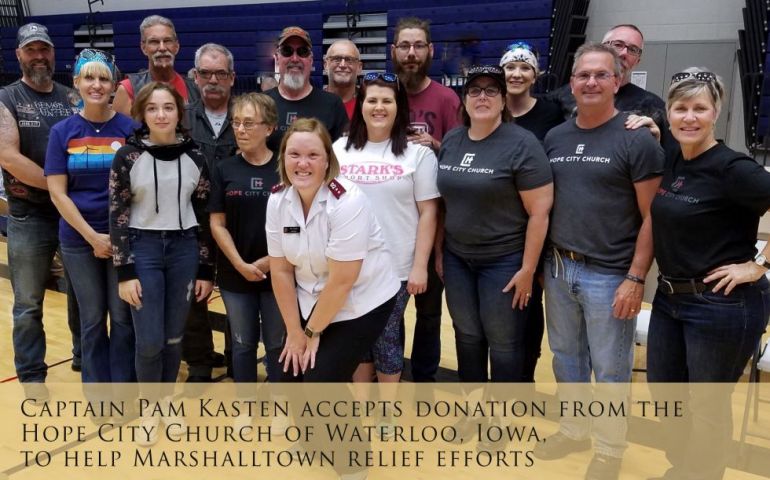 Work Goes On Despite Substantial Damage to Local Headquarters

(Marshalltown, Iowa--July 25, 2018) For the last six days, Marshalltown Salvation Army staff and the programs they lead have been operating without a functional headquarters building.

The Corps Community Center—the organization’s longtime base of operations in the central Iowa town—was damaged in Thursday’s storm, in which an EF-3 tornado struck the heart of the downtown area.

“The corps building sustained quite a bit of damage,” Corps Officer Captain Pam Kasten said.  “We have some foundation issues; the doors have been pushed in; and we’re still without power.”

Among the other damaged parts of the headquarters building is the roof, which staff hope to shore up as soon as possible.  Structural engineers are set to begin assessing the building for safety.  The goal is to have the facility reopened later this week.

But all that damage hasn’t stopped Kasten, her staff, and a cadre of volunteers from providing much-needed relief services in the wake of the storm.

Nearly 100 families received assistance Tuesday from The Salvation Army via the organization’s participation in the Multi-Agency Resource Center (MARC)—a “one-stop shop” set up for multiple relief agencies inside Marshalltown High School.  Salvation Army representatives are on hand there again Wednesday.  Plans call for MARC to be open until 6 P.M.

Kasten, meanwhile, is also receiving praise from leadership at the highest level of The Salvation Army Western Division.  Major Lee Ann Thompson, who traveled to Marshalltown from Omaha this week, surveyed the damage alongside Captain Kasten, and lauded her relief work:  “Through it all, Captain Kasten has kept the needs of the community at the forefront by making sure needs are met and people are being served.  Recovery will take weeks, months and perhaps years—but we are committed to helping until that very last need is met.”

In addition, as the corps staff and leadership continue to work toward reopening their headquarters building, a motorcyclist group from Hope City Church in Waterloo, Iowa, rode into Marshalltown Tuesday to deliver a very special gift.

The group brought in a significant monetary donation for The Salvation Army to assist with disaster relief.  The group made their road trip Tuesday to drop off the funds—plus, they gathered with Captain Kasten in prayer for the entire Marshalltown community.

“This extremely generous gift is a huge help for us,” Captain Pam Kasten said.  “We’re sending out a big ‘thank you’ to Hope City Church for their outstanding support.”

That donation will go directly toward the ongoing relief effort in the Marshalltown community.