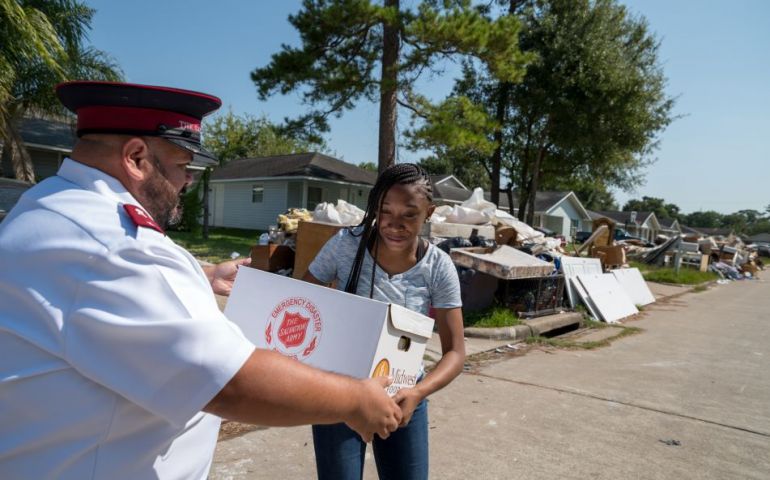 Dallas, TX (8/7/18) – The Salvation Army continues to provide long-term recovery services to residents whose lives were forever changed after Hurricane Harvey. Making landfall as a Category 4 Hurricane in late August 2017, Harvey devastated much of the Texas coastline. The storm initially hit the Coastal Bend area causing widespread damage and flooding in Corpus Christi, Rockport, Port Aransas and the surrounding communities. The following days saw similar impact along more than 300 miles of coastline before Harvey stalled over Houston, causing widespread flooding in the city and in the Beaumont area.

The Salvation Army Emergency Disaster Services (EDS) immediately responded on August 25 providing food, hydration, and emotional and spiritual care to survivors and first responders. In addition to local units in the path of the hurricane, trained disaster teams from throughout Texas and beyond staged in San Antonio and deployed in the aftermath of the storm. At the peak of service, 103 Salvation Army mobile feeding units were working in affected areas delivering almost 1 million meals, 33,000 food boxes, 92,000 comfort kits and 15,000 cleanup kits in the months after the storm.

Thanks to the generous support of the American public, corporate donors, and philanthropic organizations, The Salvation Army raised more than $30 million for Hurricane Harvey response and recovery efforts. The long-term recovery of storm survivors, with their many and varied needs, is an ongoing focus for the Army, and is where the bulk of donated funding is allocated.

“Hurricane Harvey required a response and ongoing recovery efforts from The Salvation Army not seen in Texas since Hurricane Katrina,” said Lt. Colonel Ronnie Raymer, Commander of the Texas Division of The Salvation Army. “The immediate response of our Emergency Disaster teams was swift and effective. We were able to provide practical assistance in the form of a hot meal, a drink, perhaps a cleanup kit, and an encouraging word and prayer to many thousands of people who overnight found themselves in crisis. It was such a blessing to be told, ‘Thank you, I knew The Salvation Army would come’ by those in affected communities. However, though the flood water has long receded and much of the debris is gone, the recovery for many is going to take a long time.”

All the while, The Salvation Army continued to operate its regular programs and services, providing meals, emergency shelter, clothing and energy assistance to residents in need who were not affected by the disaster.

“Salvation Army disaster teams from as far as Hawaii, Canada and California were deployed to serve to Texas, along with units from our neighboring states. Teams served for 14 days at a time and worked tirelessly to provide much needed relief to those affected. This is a testament to the dedication and scope of The Salvation Army,” said Lt. Colonel Raymer. “For many of those we helped, this was the worst day of their lives. The Salvation Army works to provide for not only the physical needs of a person, but also the spiritual needs. We will continue to serve our neighbors whenever and wherever there is need.”

The Salvation Army caseworkers are meeting with those in affected areas providing financial assistance and referrals to partner agencies and non-governmental organizations. Eight warehouses serving as points of distribution across the affected region have been opened and these facilities are receiving, sorting and distributing a wide range of items that have been donated to The Salvation Army to help survivors.

Special efforts have been made by The Salvation Army to reach into underserved areas of Texas affected by Harvey, working closely with local community advocates and agencies. Four Regional Recovery Program Managers have been hired to oversee these efforts and to network with partner agencies to provide Salvation Army support and assistance.

“The Salvation Army, motivated by the love of God and with a mission to meet human need, provides service in every zip code in Texas and is committed to stand by its brand promise “Doing the Most Good,” as individuals and families continue to put life back together,” said Lt. Colonel Raymer. “We were there long before the hurricane hit, and we’ll be there long after the recovery process is over.”

To support the ongoing work of The Salvation Army Hurricane Harvey recovery or for more information go to www.salvationarmytexas.org/harvey/