The Salvation Army Stands Ready to Respond to Gordon 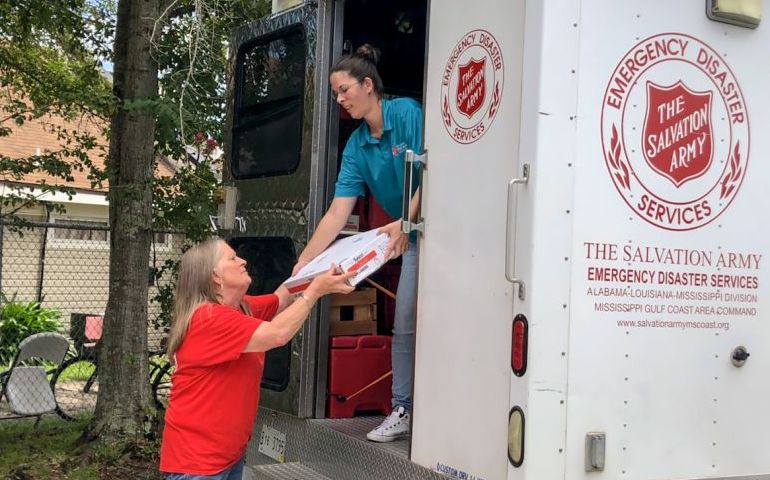 Jackson, MS— The Salvation Army Alabama, Louisiana, Mississippi (ALM) Division stands ready to respond to Tropical Storm Gordon, which is predicted to turn into a minimal hurricane before making landfall tonight along the north-central Gulf Coast. This weather event is expected to impact all three states in the ALM Division, with the areas of most concern being Mobile, the Mississippi Gulf Coast, and New Orleans. All Salvation Army ALM units remain on standby for potential activation to support affected areas as the need arises.

The storm is expected to make landfall in Hancock County, Mississippi. Mississippi Governor Phil Bryant and MEMA Director Greg Michel will be holding a press conference at Hancock County EMA this afternoon and MS Gulf Coast Area Commanders, Majors Bradley and Anita Caldwell, will be in attendance representing The Salvation Army. The Salvation Army MS Gulf Coast Area Command has all canteens (mobile feeding units) prepared and ready to go out as needed.

The Salvation Army of Greater New Orleans is prepared as well, with all canteens ready and on standby to go wherever they might be needed. The city of New Orleans has shut down operations throughout the city, which means most businesses are closed today. Salvation Army Center of Hope shelter residents are staying in place throughout the day as requested by the city. “The City of New Orleans has requested The Salvation Army to house the homeless and invite these individuals into our shelter for refuge during the storm. We will have the shelter open throughout the day tomorrow as well, we certainly wouldn’t want to put anyone out into the weather,” said Major Ernest Hull, Salvation Army of Greater New Orleans Area Commander. The main concern in New Orleans is the flooding. There are no mandatory evacuations at this time, but there are some voluntary evacuations for those areas outside of the levee system.

The Salvation Army is continuing to watch as Gordon progresses toward the Gulf Coast and is ready to serve as needed with food, drinks, shelter, and emotional and spiritual support.