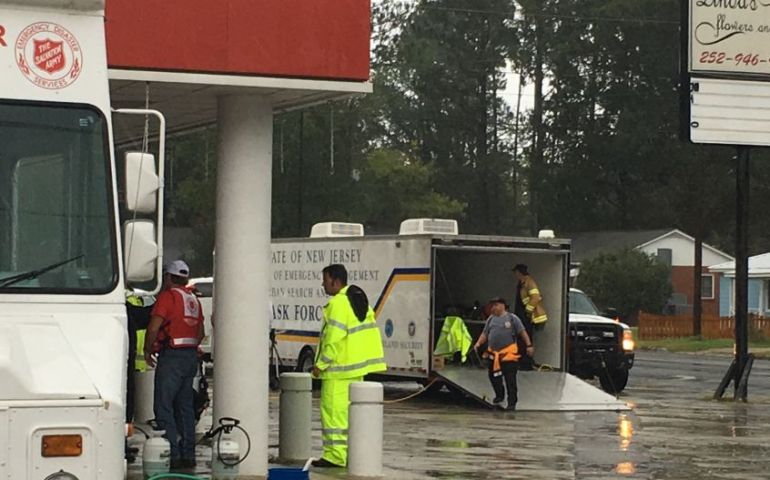 Charlotte, N.C. (September 14, 2018)—Hurricane Florence made landfall on Friday, Sept. 14 at 7:15 a.m at Wrightsville Beach near Wilmington, NC. Through the storm, The Salvation Army was at work.

This is a snapshot of The Salvation Army’s work as the storm made landfall.

6:30 a.m. Charleston SC, Captain Jason Burns
“Right now we are cooking a hot breakfast and serving in the Emergency Operations Center (EOC). We have two teams in place who are hunkered down in the EOC so we can serve the first responders and emergency management teams. A police officer told me that the meal he had was the first hot meal he had in three days because he was so busy in advance of the storm.”

7:00 a.m. Morehead City, Major Stan Colbert
“We are being inundated with rain and the wind is howling. At daylight, we will begin to see the damage sustained. Currently, The Salvation Army is serving meals at an emergency shelter in a local school and has been since Wednesday. The advisory board here is wonderful and have been working tirelessly. Three of our advisory board members are here now – they stayed overnight through the storm so we can sustain service.”

7:00 am. Florence/Marion County SC, Major Susan Rodgers
“We don’t have any rain yet, but periodic strong wind gusts. Our crew is heading to Marion this morning to feed lunch and supper to our first responders. Tonight we will serve supper in a shelter in Blenheim, SC. We are cooking in two locations and sending meals out from there.”

7:45 am.  Wilmington NC, Major Mark Craddock
The Salvation Army homeless shelter and administrative building sustained roof damage just after the eye of Hurricane Florence blew over Wilmington. The 30 employees, church members, and residents sheltering in place during the storm were safely evacuated to the Salvation Army Family Store adjacent to the shelter.

8:00 am  Sumter SC, Major Sharon Robbins
“Early this morning we sent breakfast to four evacuation shelters this morning to feed close to 1,000 residents. Our employees and volunteers are working to cook, plate, and box up the food and then deliver it to the shelter. We are working side-by-side with our Red Cross partners.”

8:00 a.m.   Washington NC, Lt. Karl Bush
The sheriff reported that 50% of the town of Washington is flooded. Currently, The Salvation Army is feeding 225 first responders and emergency management teams at the EOC.

8:30 a.m. Georgetown SC, Captain Tim Scott
“We are feeding people in six evacuation shelters in two counties today had of the storm. We have a team cooking in locations and then the meals are delivered. The Williamsburg sheriff department has partnered with us – they pick the food up from us and then deliver to the shelters in Williamsburg counties. Yesterday US Foods made an emergency delivery of food to us– we were so grateful! They delivered enough food to get us through the storm. Then we can pick up when we are on the other side of the storm.”

8:45 a.m. Elizabeth City NC, Major Ken Clewis
“We have minimal damage at this point and the power is still on. Right now we are supporting the Red Cross shelter at Elizabeth City State University – The Salvation Army team is feeding 140 people three meals a day. Today we are also assisting DSS in Currituck County by distributing food as requested.”

Since Monday, September 10 The Salvation Army has been working around the clock to mobilize response teams to prepare and respond to needs after landfall. More than 50 mobile feeding units from around the country are stationed along the coast to serve communities impacted by Hurricane Florence. We are there before, during, and after the storm.

You can support the ongoing relief work of The Salvation Army by making a financial donation at to www.helpsalvationarmy.org, call 1-800-SAL-ARMY, text STORM to 51555.