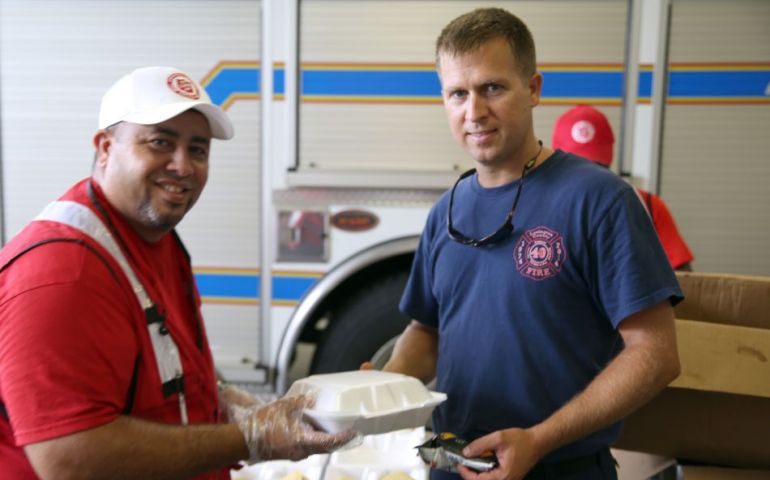 CONWAY, SC (September 17, 2018) - Conway, S.C. sits just inland from Myrtle Beach, which is located at the heart of South Carolina's Grand Strand coast. The area is a haven for millions of residents and vacationers that enjoy the wide beaches, sunny days and warm weather in abundance. It was one of those beautiful South Carolina days, the day before Hurricane Florence hit. And if you were not listening to weather reports, you would have been without a clue to the destruction headed toward you.

But many people were watching and preparing for the inevitable. They knew what was ahead – and they were trained, experienced and ready for what was coming ashore. These were the first responders; a collective group of local heroes who put their lives on the line every day to protect our local communities and help keep them safe from harm.

Four days after landfall, Florence was still lingering over South Carolina.  And the first responders of Conway, S.C were still in action. “Last night was a tough night,” says Captain Robert Rudelitch of the Finklea Fire Department Station 9, “The whole night was spent doing water rescues; people stranded in homes and cars.”

People rescued by the Horry County first responders stayed in area shelters, and at the Finklea and Loris, S.C. fire stations. “Thirty people spent the night at the Finklea station last night,” added Rudelich. The Salvation Army provided meals and hydration for those rescued and the responders, as well.

It’s now the fifth day after Hurricane Florence hit, and the sun is coming back out in South Carolina, attempting to dry those wide sandy Myrtle Beach vacation spots. But like a bad second verse, danger lurks unsuspectingly just days ahead as the torrents of water Florence dumped on the North Carolina watershed make their way downstream to Conway and Myrtle Beach. Another storm is coming in the form of flood waters.

The first responders will be there ready to take action. And right along with them will be The Salvation Army.

“Every day, first responders put their own lives on the line to ensure our safety. The least we can do is make sure they have a good meal and something to drink,” says Williams.

And he knows what he is talking. Williams is also a former Captain for the Horry County Fire Department and a former Emergency Management Director for Horry County.